Where I live, or I should add nearby, there’s an old white building for years I assumed was a library. It’s right off Presidio Park drive in San Francisco. I learned a year and a half ago that it was the home of the Internet Archive. 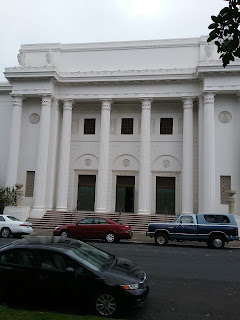 Now, the Internet Archive has been a resource for all on-line internet media, including books, sites that have gone missing have been archived there. This is especially important for some of the valuable written content that has existed since the mid 90s on the Internet. While it is true that the internet features a great deal of misinformed dreck, the internet has also featured some great resources that are / were well researched, informed, insightful, and that broke the line between legitimate, old school journalism, and freed up a kind of citizen based journalism that was a two edged sword. 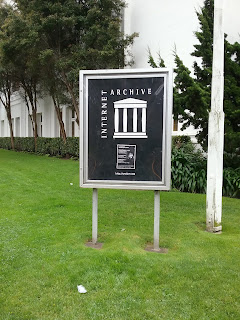 Some of that citizen journalism was well done, and responsible, and some of that citizen journalism was not, and that is really the fault of the individuals involved when they were not responsible for their work. Nevertheless, you’ve had people who worked quite hard, with long hours of thought, elbow grease, and ethics to offer their best for little payment, or no pay, and with the belief in the free exchange of ideas. There might have been excesses along the way, abuses, when it comes to file sharing, or breaches in ‘Fair use’ rules, or abuses with frivolous sound bite content that is driven by 140 characters.

There might have been Silicon Valley figures with Utopian dreams about using the internet in the ‘app age’ to solve the ills of services, and goods, thus creating new problems without fixing the displacement of the work force of those services. Few could have seen the downside to a Facebook or a Redditt many years before. There have been abuses indeed, but the many bad apples shouldn’t spoil the whole bunch, we have always seen excesses in every aspect of culture.

The folks behind the Internet Archive have announced, due to developments with the new President Elect, they are moving their operations from San Francisco to Canada, to protect their servers in light of a new administration that has indicated, during the campaign, a lack of support for Internet Neutrality, the elimination of the FCC, and raised questions about revising the meaning of the First Amendment. Now, as to if this is all just heated rhetoric that will lead to nothing is hard to say, but we are facing a seismic shift in our culture, in our politics that one should be vigilant with, Elections have consequences and this is more true when our culture could be facing a government that no one really knows what to expect. An Autocratic government? A Kleptocratic government? More of the same authoritarian government we saw in the early 2000s? All of the above, or none of the above?

We have supported, at The X-Files Lexicon, Internet Neutrality for a decade now for sound reasons. The belief that information is the coin of the realm, regardless as to if that information is entertainment based, news based, history based, or science based. The mechanics of explaining how Internet Neutrality works has been complicated, but the objective has remained that a consumer should not have to pay to play, while it’s understandable with on-line news outlets to pay a subscription fee, the system should not be rigged to force that situation in all matters, especially when it’s done for politically expedient reasons.

We should address the other ramifications related to The X-Files season 11 news. The comments from Gillian Anderson about nothing happening, and the added comments from Anne Simon, which suggest that the election outcome has affected FOX studios decision to not move forward with another short form season. This could have little to do with politics, but more about scheduling conflicts and how much various parties want to commit. If this set of circumstances had to do with knee jerk action to the political climate, it would be a waste to ignore such salient points as the high ratings of the first three episodes. It also runs counter to how Television networks operate, where they live and breath off of high ratings. I feel people shouldn’t draw certain conclusions yet.

Fact based truth should not be a causality of social or political movements, but they often seem to be the first causality in the struggle to uphold free speech.

We are living in cynical and faithless times, it’s true that trust in all institutions have collapsed, but that doesn’t have to be the case. This collapsing of trust was intentional, by design and by various parties.

This lack of faith in the realm of information, this blurring of legitimate information, and artificial information has extend into every area now.

When the line between the tiny sliver of legitimate global conspiracies has been blurred to mean everything is a conspiracy, it loses all meaning now.

When we are conditioned to accept what was once unacceptable, it has lost all meaning now.

When we abandon fact based truths, or data, then everything means nothing now.

This malaise is not just a symptom of America, but of the entire world now.  It does feel like there’s a global re-wiring at work in Europe, The UK, France, Italy, and Latin America, all to benefit the Eastern regions at the expense of everyone else.

This example with the relocation of the Internet Archive is one tiny piece of this new paradigm shift, the list is vast with other pieces of this puzzle.  But we might see further changes soon. One cannot predict the future, only pay attention to the clues.

Like the destruction of the Library of Alexandria in AD 642, we should take care to not repeat history.

Posted by The X-Files Lexicon Blog at 4:29 PM 3 comments:

The X-Files Lexicon webmaster appeared on Tony Black’s The X-Cast to talk about season two’s episode, ‘3’. Tony could not have been more gracious and some interesting points about “3” were raised, as Matt Allair has always felt it was a better episode than given credit for by fans. The podcast explains why.

Posted by The X-Files Lexicon Blog at 7:20 AM No comments:

The Future of The X-Files Lexicon blog...


Hi, crazy and rough week for many.  I don’t know what the future of The X-Files Lexicon blog is going to be now. The good news is that we will continue publishing the great work of Chris Irish and his reviews of the IDW comics, and X-Files topic related articles.

Some of the past articles that I was writing, that initially built up the reputation of the blog as an alternative source of topics related, and somewhat unrelated to The X-Files is under review.

You see, there were certain articles that appealed to a certain audience, and the relationship with certain circles changed. With the personal views that are expressed, I feel the need to be real and honest about everything as I saw things. I just couldn’t post anything I didn’t believe in.

We’ll keep going, rest assured. But I feel I could use some input about what you want to see on the Blog at this point.
Posted by The X-Files Lexicon Blog at 9:24 PM No comments: