The Danger of "Seeing is believing"

One of the problems and dangers for ufologists, or people who believe in alternative theories, is taking certain photographic evidence at face value. The adage, "Seeing is believing" isn't necessarily true concerning photographic evidence, and for those who do believe, or who are open to the extreme possibilities, they should allow for a degree of skepticism. There are two examples I will site, to illustrate my point. The first is a controversy that brewed in the summer of 2007, in various locations throughout California, the alien "Drone" ship(s) flap.

Photos were taken of various drone objects between April and May 2007, the most circulated were from Capitola in May 2007. 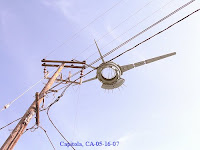 As well as evening photo’s in Lake Tahoe May 2007, and Big Basin. 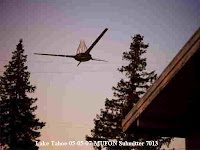 To complicate matters, there were earlier reports of similar objects in Birmingham, Alabama in 2006, and allegedly Georgia (Russia, assumed) in 1996. 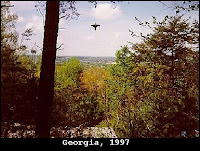 There we’re also claims in a disclosure from someone named "Issac", who worked in Palo Alto, California in the eighties. That he was working on a project to reverse engineer UFO technology. And had documentation to prove these "drone" ships were real.

Mufon has investigated the "Drone" issue and issued a report, determining is was an elaborate hoax, as well as the claims from "Issac" and this can be found at the following PDF file (you will need Adobe Reader to pull).

To any objective eye, the photos should have looked suspect. They looked a little too pristine, and looked like the construction of CGI modeling. It was probably due to some on-line viral marketing campaign. Yet, as I recall, some of these pictures went out to the national media. The problem lies with Ufologists who mistakenly took this at face value.

The second example of the problem of "seeing is believing" has to with Richard C. Hoagland, a former science curator and advisor to CBS news during the Apollo missions of the 60s and 70s. This is problematic for a great many who follow his work. He has argued that advanced civilizations exist or once existed on the Moon, as well as Mars, and some of the Moons of Jupiter. That the American government and NASA collaborated to keep these facts a secret, he has published a book titled "Dark Mission: The Secret History of NASA."

He was interviewed in a program titled: "Project Camelot", which featured his claims that the Apollo NASA missions were executed to secretly uncover evidence of ancient glass domes on the surface of the moon, as well as evidence of the head of an android that can be seen in one of the landscape photos. Mr. Hoagland makes the standard argument that the discovery of extra-terrestrial life would trigger a crisis of global faith. An argument I never personally understood for the following reason: Why couldn’t God create life on this world and life in other worlds in the universe? and why would such a possibility be a conflict?

Indeed, is it hard to know what to accept with Mr. Hoagland. He seemed founded in the principle of scientific research, yet it is possible somewhere along the line, he went astray in his scientific pursuits. Regarding his claim of a droid face on the moon? It is human nature to find patterns in nature and objects. Examples would be shapes found in a cloudy day, or a face that can be found in the shrubs of a tree: "Seeing isn't always believing".

Then there is his other assertions later in the interview, that NASA astronauts photographed evidence of glass domes, and that these domes we’re twenty times stronger than steel, he argued generally, if you mix the glass with various minerals and metals, there are various things that could be done with glass.

He basically argues that if you turn up the brightness of certain photos from the Apollo missions, you find various hidden patterns, grid work, structures, scaffolding and buttresses, as well as evidence that support the argument for glass domes because of light prisms in some of the photos. These discoveries were made based on image processing that was analyzed by architect Robert Fritech, where a model grid was created. He also asserts that after these photos were taken the negatives were tampered with. My issue is, my question is, was an outside, objected party brought in, and recreated exactly the methods behind Hoagland’s image processing analysis? It would add to the credibility of his argument, and would demonstrate an example of proper scientific method. There’s no known evidence of such an effort being made.

It should be noted, based on arguments from detractors, that Mr. Hoagland once argued the lunar landings were fake, and has done a reversal to support his present arguments, which can be found here (although the tone seems needlessly hostile):

I asked a friend with a fairly solid background in structural engineering if Glass could be stronger than steel in outer space. He concluded it's not possible in theory. The other point that should be questioned is the possibility that light distortions are being misinterpreted in the photographs. Unless someone can come forward with a credible explanation, can anyone claim or fully conclude that video and film imagery reacts in outer space exactly as it would in our atmosphere?

The issues concerning Richard C. Hoagland are more complicated, but no less problematic. For those who believe, or are open to the possibility of extra-terrestrial life, they should be careful to take at face value Mr. Hoagland's conclusions: "seeing isn't always believing", and for those who want to believe, that there are truths out there, they should allow themselves to be discriminating in the pursuit of such truth.

Special thanks to UFO casebook and Mufon.
Posted by The X-Files Lexicon Blog at 7:41 PM No comments:

There's a long spell where I haven't added anything to here. It's really hard to believe that with this election, we have officially entered the 21st Century. We'll soon see how things develop, both pro and con. My deepest hope is that we will no longer be bound and shackled to 20th Century thinking. There was an interesting article about Obama's appointment for Director of National Intelligence, retired Admiral Dennis Blair.

Blair will have limited access to the intelligence communities classified files on UFO's and Extra Terrestrial life. On a side note, a random thought, there's a rumor that CIA Director, Leon Panetta's associate, John Podesta is a big X-Files Fan, As well as being known for advocating for the declassification of Government documents.
Posted by The X-Files Lexicon Blog at 9:37 PM No comments: