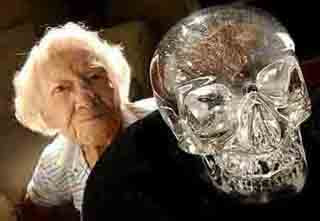 In 1962, Donald Seaman, a journalist for the Daily Express, who was writing a book about espionage, came across a photograph of the recently convicted spy, Gordon Lonsdale, that showed him posing with two middle-aged women. Careful research revealed that one of the women was Anna Mitchell-Hedges. Curious to find out what she was doing with a spy, Seaman contacted her at her home in Reading and went to see her, accompanied by a photographer. The story behind the photo proved to be innocent enough; it had been taken at an historic castle, where she and her friend had fallen into a conversation with the man who would later prove to be the center of the Portland spy case. She hadn’t seen Lonsdale since then.

Anna asked, perhaps out of guilt for their wasted visit, if they would like to see the “Skull of Doom.” Being that nether of them had heard of it, she escorted them to the master bedroom, and while groping under the bed, pulled out a large cabbage-sized object wrapped in newspaper. They followed her back to the sitting room where she unwrapped it and placed it on the table, a nearly life-sized skull that seemed to be made of polished diamond. In the dim light it had a greenish hue, as if lit from inside or from underneath. Its lower jaw moved like that of a human jaw. Anna told them that this was the “skull of doom” found in a Mayan temple in 1927 by adventurer Albert Mitchell-Hedges, thus beginning a strange tale. 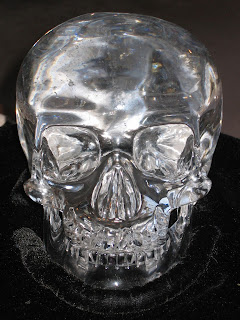 It has been described as a fearsome skull, weighing 11 pounds 7 ounces (5.19 kilograms), carved of pure quartz crystal. Its eyes are prisms and some believe the future and the past appear in them. Its owner believed it came from a lost civilization. The skull had belonged to Mitchell-Hedges, born in 1882, and upon his death in 1959, was passed onto his ward, Anna, who was born in 1910. She had claimed to have initially discovered it, according to her own account:

“I did see the skull first–or I saw something shinning and called my father–it was his expedition, and we all helped to carefully move the stones. I was let [allowed to] pick it up because I had seen it first.”

This discovery was made during a South American expedition to the Mayan city of Lubaantun, meaning ‘place of fallen stones’, in the British Honduras. It was found, apparently, underneath the alter in the ruins of a Mayan temple. The date she had given for this find was 1924, which would conflict with the later date when she claimed the discovery was made on her seventeenth birthday. She had found the upper part of the skull and she revealed that the jaw was found three months later under rubble, twenty-five feet away. She further told Seamen that in 1927, her adopted father had been looking for treasure buried by the pirate Henry Morgan in 1671. Mitchell-Hedges was convinced that the remains of the lost civilization of Atlantis were located within Lubaantun. After her father died in 1959, Anna wanted to return to Honduras to look for Morgan’s treasure, and in order to raise the funds, she was willing to sell the skull, as well as a drinking mug that had been presented to King Charles II by Nell Gwyn – a piece that had been authenticated by scholars.

She further explained that Mitchell-Hedges felt that the skull belonged to the local Indians, descendants of the ancient Mayans, and he gave the skull to them. But when he prepared to leave for England, during the rainy season of 1927, the Indians returned it to him as a present for his kindness. Mitchell-Hedges believed that there was a connection between the Mayans and Atlantis, and he hadn’t been the only one who shared such a belief. Another explorer, Colonel Percy Fawcett, believed that he had evidence that survivors from Atlantis had reached South America and that the evidence lay in Brazil, yet Fawcett vanished without a trace on a Brazilian expedition in 1924. Mitchell-Hedges believed that the survivors had come ashore farther north, in the Yucatan Peninsula of central America, and one of the objectives of his expedition in Honduras was to look for proof of this theory. While he never found it, he did find clues to the lost treasures of Captain Morgan.

Mitchell-Hedges declared that the skull was three thousand and six hundred years old, but such a date would have taken the skull back a thousand years before the earliest known date suggested by the Mayans. Mitchell-Hedges also suggested that it must have taken a hundred and fifty years to create, by the grinding and polishing of rock with sand. Erich von Daniken in his book Chariots of the Gods had suggested the skull was created by ancient astronauts, the same astronauts who helped create the Great Pyramid. Many experts are divided on the subject of the skull’s origin: most concur that it was probably carved in Mexico, or Calaveras County, California, and it could have been manufactured within the past five hundred years, arguing that all known skulls are post-Columbus.

By most accounts Albert Mitchell-Hedges was a remarkable man. He met Anna in Toronto in 1917. She was a seven-year-old orphan by the name of Anna Le Guillon. He was touched by her plight and adopted her, and so it would be understandable that she would be devoted to him. His character has been described as similar to a swashbuckling Henry Morgan. He had a keen sense of humor, and he enjoyed telling–even printing–tongue-in-cheek tall tales, inspired by his childhood reading of Rider Haggard stories, and Arthur Conan Doyle’s Lost World, which reflected the character of a man who was, in some respects, like an over-grown schoolboy. He did pen his own books of his experiences, Land of Wonder and Fear, and Battles with Giant Fish, and his autobiography Danger My Ally (1954). In some respects, one could compare him to P.T. Barnum. Some consider Mitchell-Hedges an Elizabethan adventurer born out of his time.

Skeptics are focused on a number of inconsistencies, and have used them for ammunition. It has been suggested that Mitchell-Hedges had brought the crystal skull from London to Lubaantum and planted it to be discovered. Norman Hammond, an archaeologist who excavated Lubaantum, failed to mention the crystal skull in his book on Lubaantum, and has explained that “Rock crystal is not found naturally in the Maya area,” to skeptic investigator Joe Nickell, and that the Crystal skull had nothing to do with the area. Hammond had further pointed out that the nearest places where crystal skulls had been found were Oaxaca, in southern Mexico, and small skulls of Aztec manufacture in the valley of Mexico.

Other skeptics have pointed out that Mitchell-Hedges had been caught in several falsehoods. One being that he served with the Mexican revolutionary Pancho Villa, and fought at the battle of Laredo, and that he lost a libel suit against the Daily Express in 1928, which claimed that Mitchell-Hedges had staged a fake robbery for the sake of publicity. The issue of the skull’s bonefides became questionable when the skull was referenced in a 1936 journal entitled Man- A Monthly Record of Anthropological Science, wherein two experts compared the skull with another and referred to it as “the Burney Skull,” which we will discuss in the next segment.

Yet, for enthusiasts on the matter, the issue of its authenticity was made more complicated when a modern crystal expert, Frank Dorland, claimed he could make a similar skull within three years, but with the aid of modern technology. Yet Dorland, who was allowed to examine the skull for seven years starting in 1963, speculated the skull could be as old as twelve thousand years, Dorland had sent the skull to the laboratory of Hewlett-Packard Electronics, who suggested the skull had taken a long time to manufacture–perhaps three hundred years. Dorland believed from personal experiences that the skull might have mystical properties--that the skull could absorb living energies, an idea espoused as possible by clairvoyants, who use crystals because they can absorb such energies. Basis for this belief has been argued by biologist Rupert Sheldrake, that learning between human beings and animals is “transmitted” by a process he described as morphic resonance.

Of course the truth can often be not as we like, or more evasive, and the details of this story are far more complicated than initially assumed. The next segment will explore my own personal inquiry into the Mitchell-Hedges skull, and personal contact with a archeology professor emeritus on their experience with the skull, and the question as to if the skull should be regarded as nothing more than a fascinating urban legend, or a subject that raises the far more interesting question, if ancient South American civilizations were much more advanced than science assumes.

Special thanks to Xscribe for editorial assistance.

Sources : ‘The Mammoth Encyclopedia of the Unsolved” by Colin and Damon Wilson, published by Carroll & Graft © 2000