Review for “Where There’s Smoke: Musings of a Cigarette-Smoking Man” 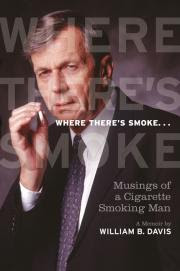 William B. Davis, the perennial actor who played the iconic villain from The X-Files, has written and published his autobiography. His memoirs reveal a man who has demonstrated real ambition, accomplishment, and just as much fallibility as anyone else. Regarding the public man, he holds an impressive resume as an actor, stage director, theatrical department head, writer, and water skier. The book has already triggered some consternation with some hardcore X-Files fans, due to some observations about David Duchovny, Gillian Anderson, and Chris Carter which will address in a moment. For fans accustomed to seeing interviews with Mr. Davis, or public appearances where he came across as a poised elder statesmen, then the candor and bluntness of the book might come across as jarring at first glance.

The first half of the book manages to paint a vivid portrait of his childhood, starting in the late thirties, progressing through his years as a child radio actor from 1949-1952. These portraits manage to helpfully paint a vivid idea of what Canada was like in the early fifties, and they are told with a candid, child-like perspective.

Then it progresses through his early development as a stage actor in summer stock, his work as a child radio actor, his admission to being an average and passable high school student, at the University of Toronto system, and at an art college, and his association with countless actors, directors, and teachers that shaped his development as an actor.

Of course, if this book was simply a parade of affairs, career connections, and life changing decisions, it wouldn’t be as compelling, but it does focus on his evolving process as an actor, director, and writer, and interestingly reveals a man who isn’t tied to a particular method or technique as an actor, and in this respect the book drops hints about his creative process.

As the book transitions out of his formative college years, it manages to pull you into Canadian life in the late fifties, and the career paths that led him out of Canada to London with LAMDA at the start of the sixties. What is established at this juncture of the book, is a consistent pattern throughout his career, and life; one door closing while another one opens, with these developments occurring when it is least expected.

Mr. Davis recounts his friendship with a number of future icons, another Canadian thespian Donald Sutherland, and his tenure as Assistant Director of the National Theatre of Great Britain in the early 60s, crossing paths with Sir Lawrence Olivier, and befriending Albert Finney, working with Maggie Smith, and crossing paths with Derek Jacobi. Mr. Davis’ observations about Michael Elliott, and that director’s insights into how to draw out a performance from actors are indeed fascinating.

As the book progresses through the late sixties and seventies, the focus, that is until he writes about his X-Files tenure, seems to be less vivid, and this becomes a draw back. It reminds me of the structure of the third act of a play, film, or episode, where you fill in needed exposition until you reach that more compelling resolution in act four.

The fourth act being his experiences with working on The X-Files, often his observations are interesting, insightful, colorful, and do help to fill in some details of what life is like on a cable series. Yet let’s address and contextualize a few of the comments that have triggered some controversy, from some rather benign creative disagreement with Chris Carter:


“I recall a scene with Peter Donat playing beautifully as we rehearsed in and shot my coverage. But, curiously, at some point, whether sent for or not, Chris Carter joined director Bob Goodwin at the monitor. After a while Bob gave Peter a different direction. Team player that he is, Peter responded with a much more obvious, portentous, and less nuanced performance than he had been giving before. Chris gave Bob a thumbs-up and left.”


One has to bear in mind, that there can be limits to how much nuance there can be with cable television: Peter Donat’s performance was indeed excellent, and so the comment might reflect Mr. Davis’ familiarity with Mr. Donat’s history and what he was capable of doing. The less diplomatic observations about Gillian Anderson and David Duchovny that follow, have to also be contextualized.

After admitting the great strain and pressure that Anderson and Duchovny were under during the show, Mr. Davis observes:


“Did these working conditions contribute to the strained relations between David and Gillian? Probably. Or between each of them and the crew? Were their idiosyncratic personalities key to their success in their roles and at the same time destined to create friction? In truth, I didn’t see them together often, and most of what I know of their interaction with each other is from hearsay.”


Then he further adds:


“What I saw was an arrogance, a lack of professionalism, and an incivility quite foreign to my British theatre trained habits.”

Further he comments about David frequently being late for his call time, and Gillian never being ready to come to the set when she was called, as well as complaints about Gillian’s lack of friendliness in comparison to his experiences with Anne Hathaway. He further observes:


“Gillian is certainly aloof, but it may be that she is more shy than arrogant, that she only seems arrogant. First AD Tom Braidwood says that she was “always a sweetheart.” I didn’t find that and I doubt David did. But what is more interesting is how her personality informed her character. After all, can you really see Anne Hathaway, wonderful actress that she is, playing Scully? Did that combination of self-containment and occasional vulnerability give Scully the iron and the appeal that made the character such a success?”

In fairness -- having personally worked as a background extra on a feature, and on several television series -- I have to admit that the hours are grueling, and surprisingly mind-numbing by about the midday point. When you amplify the pressure that the leads have to deal with, an individuals best and worst traits come forward under such a situation. Mr. Davis also belongs to a generation that probably holds a different set of standards, as he acknowledges.

I am aware that some fans have already complained that such comments seemed mean-spirited and needless, and while I might find them personally disagreeable, that’s besides the point in accessing the merits of the book. Ultimately, are his comments uncharacteristic in tone in relation to earlier observations in the book?

Actually, they are very consistent with observations he makes on countless actors, directors, and academic program directors. The gist of the book has a warts-and-all sensibility. He is candid about his relationships, and even candid about the embarrassment of contracting an STD. He also tends to be just as self- critical and reflective on his own failings. In some respects, the tone of the book reminds me of Miles Davis and Quincy Troupe’s Miles: An Autobiography, which faced a lot of controversy due to Miles’ language and blunt observations.

I suppose the remaining question has to do with accessibility, and that is somewhat problematic. The book feels very niche-driven; I could see it appealing to X-Philes, or Canadian residents that are familiar with Mr. Davis’ illustrious thespian and directing career, or as an invaluable resource to acting students. Nevertheless, it is a worthy read for anyone who is searching for insights into one’s creative process.

Special thanks for XScribe for editorial assistance.

Please check out our exclusive interview with William B. Davis about the book and his career.
Posted by The X-Files Lexicon Blog at 4:19 PM No comments: