A number of unfolding events had prompted a change of pace with the blog sequence. The hustle and bustle of preparations involved for the Lexicon’s coverage of the LAX-Files Book signing event in Los Angeles on May 7th, had thrown aside other priorities. While this blog ended up not being used to promote the event, it would have been remiss not to address one of the single most significant fan events to come along in 2011. But, while other sites, including ours, will feature plenty of coverage about it, I felt it might be more interesting to read between the lines and look at the entire experience as a whole. This entry fits more in line with a typical ‘blog’.

I have often been preoccupied with narrative arcs and mythologies, and while it might be difficult to see a narrative in the mundane of day-to-day life, the truth is, we wake up, breathe, and deal with a narrative arc each and every day. Of course the earliest and most potent arc was the Hero’s Journey, as broken down by Joseph Campbell. The origin of all story-telling began with individuals speaking about their travels. Motion and travel can be a great soothing balm, and can often allow for great introspection, when circumstances allow. One idea that spontaneously struck me was to write on my laptop computer on my way to and from Los Angeles, with various thoughts, observations, and armchair altruistic philosophies.

I would argue that you can find a narrative arc in something as commonplace as a road trip, and perhaps, in the most subtle of ways, you can capture a few fleeting moments of something metaphysical as well.

On Friday, May 6th, I was out the door an on my way by 4:30 AM. It seems to shock people that I am willing to travel to Los Angeles from the Bay Area at such an early hour, but I am able to avoid traffic by using this tactic, and it insures that I can arrive in LA at a reasonable hour. I had made arrangements to stay with my cousin and his wife in Santa Monica for that evening. I was on my way...

Out of the bay area, another wonderful sunrise. The air is crisp and clean. A cavalcade of birds chirp at the first rest stop. There’s a group of insects that look like fire ants on the pavement, but I doubt they are. I managed to wake up by 3:20 AM. Seal is on the CD player as I continue... 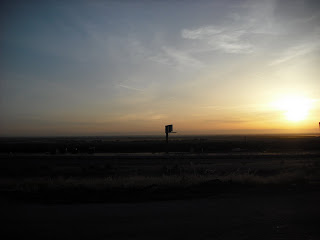 You know, it’s understandable why primitive man viewed sunrises to sunsets as commensurate to a life cycle. Seal’s Dreaming in Metaphors remains one of his best songs, “Trying to hold to something we couldn’t understand.” It becomes hard to define the distinctions between reality and metaphysics. I don’t mean psychosis, or hallucinations, I mean perhaps our dreams are a kind of parallel universe. Anyway, to continue, Amiee Mann on the player next…

There’s an owl hooting in a tree. I couldn’t find it, but could hear it. I wonder if that signifies anything?

If God exists, I suspect God expects us to appreciate the little things...

It’s amazing, as a species, how we’re supposed to compartmentalize everything, put ourselves into different modes of thinking, depending upon the situations in which we find ourselves. In some respects, how we put on different masks, or personas to fit into a situation.

I had a bite to eat at a place that featured a novelty shop, most of which was junk, but they did have some nice dream catchers.

I’m feeling dazed after a long stretch on I5. There’s one part that is brutal.

I’m fairly certain X-Files fans could Identify with this idea: Have you ever seen an innocuous location and imagined it held a military secret? There’s my first X-Files contemplation of the day. As photographed. 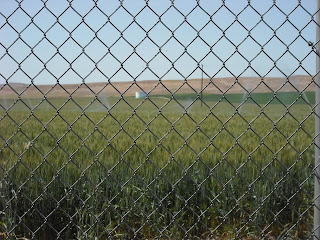 I’m in Valencia, near an Art College I wanted to attend ages ago...The paths not taken. I got through the second stretch of I5.

While writing my previous blog entry at a rest stop (11:05), a woman passed me and made a snide joke. “Just can’t leave that computer alone.” It just amazes me how people presume. I could understand the comment on some level; I have been in enough Starbucks to see people on laptops just to surf the net, and not really work. I don’t have internet access on my laptop; I use it strictly for writing.

There’s a rumor that the special guest attending at the X-Files Book signing event is a male actor, last time I checked, everyone was speculating it was Nick Lea or David Duchovny. We shall see. The weather is what I expected. Hot. I’m recovering from the daze of the drive. Valencia is a lovely little town; if you’ve never passed through it, recommended.

About an hour later, I arrived at my cousin’s place. Waited in the car for them to come home, got coffee, just relaxed. Friday evening, after settling, we went to a nice Italian/Americana restaurant. Had breakfast Saturday morning, at a 50s-flavored greasy spoon with them and then I was on my way to the AFI campus. Details of that can be found on the Lexicon. David nor Nick Lea ever made it.

For the site, the outcome was a resounding success. I felt a little like a knight that vanquishes a dragon. I had another dinner with my cousin that evening, then we all crashed early. I got up about 6:00 AM, Sunday morning, and was on my way by 7:30.

Back in Valencia again. Yesterday was a resounding success. In the mythos of the hero’s journey, he has to survive the skirmish, and that is how it feels today.

There’s the adage, Hope for the best, expect the worst. It seems to be second nature for me, but I was priming myself for several disappointments that never transpired. That mindset has become a reflex for me, the way I prime myself.

The Misty Mountains of Gorman. 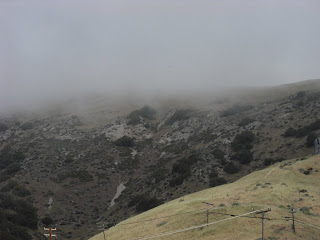 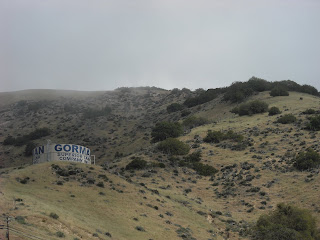 Green Day is on the play list, they seem to get a lot of flack about their street creed, but I have to give them credit, their last two albums captured the feelings of a percentage of disaffected youth, this sense of America in a slow decline, and the fact that many institutions are breaking down at this point, as well as the problem of being bound to religious dogma. I keep thinking about that verse from ‘See the Light’.

I crossed the River, fell into the sea,
Where the non-believers, go beyond belief
Then I scratched the surface, in the mouth of hell,
Running out of service, in the Blood I fell.

Perhaps that’s the best ideal, to be spiritual, and to go beyond belief…

I’ve been pondering. Is one of the goals in life to become altruistic? What happens when you live in a society that doesn’t value altruism?

I write this at a rest stop, facing an orchard of apple trees. It’s cooled off on I5, and it’s been an overcast Sunday.

I had a bite to eat earlier. Could this be any more bucolic? It reminds me of Clark Kent’s Smallville. 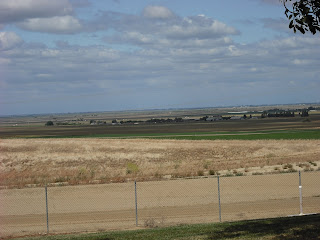 I arrived home at around 6:30, exhausted. I was reminded of the subtitle of J.R.R. Tolkien’s The Hobbit–There And Back Again.

Then I had a lot of work to do. You can check out the reports and videos of the event at the Lexicon.

I have no idea if I achieved any greater insight through this experiment, but I suspect it’s a process, being mindful of your surroundings, looking out, keeping your eyes open for little transformative moments.


Special thanks for editorial help from XScribe, and belated thanks to her for the previous entry.
Posted by The X-Files Lexicon Blog at 10:04 AM 1 comment: