Where things stand with "The After"... 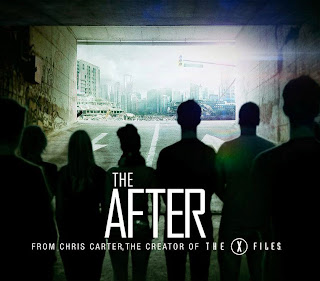 The following is not a review of the Pilot, but more a contextual advocacy. To those who follow this blog and in case anyone here is unaware, just over a week ago there was rapid press build up, with teaser clips, and another teaser clip from X-Files News for Chris Carter’s Pilot, The After from Amazon studios. Within a day, the Pilot was released to be viewed at Amazon and Amazon Prime for free streaming. But, of course, there’s a catch. Five pilots were financed and the one (possibly two) with the highest ratio of positive reactions from the public and get green light with more episode ordered for a season. This is an unprecedented development with entertainment media, and Amazon is trying to compete with the original content produced by Netflix. All of which means that fan support for Chris Carter’s pilot is crucial. We are in the middle of something that could end up being historic, depending on the outcome. With numerous segments of fandom-active players in this development–and fittingly, a kind of interactivity with Philes that we haven’t exactly seen for a long spell–this outcome could be sweeping when you consider the development of another show by Chris Carter from AMC, and the status of a third X-Files movie, and the status of a (hopeful) Millennium feature film or TV movie. Undoubtedly there’s a certain act of goodwill on the fan base, which I am well aware of.

Personally, I have advocated for the past three years supporting any new projects by Chris Carter. I have taken the longview that new projects that are a hit can only enhance the value of The X-Files, and Millennium. Developments with the film that was to follow I Want To Believe –Fencewalker--seems to be in a holding pattern, which has always seemed unfair in that the public hasn’t been given the opportunity to access it on its own merit. As of this writing, it is uncertain if Fencewalker will even get a direct to DVD release.

Yet demographics continue to shift and one never really knows when a time is ripe to reach the public consciousness. It almost determines itself, but it does feel like a good moment for Chris Carter to come back into the fold of television. Back in the 90s, and the retrospective critique that has followed, there were endless comments about how The X-Files captured the Zeitgeist of the era. Many found it appealing due to the chemistry of Mulder and Scully, while others found the subjects of the paranormal and alien abductions to be fascinating. I suspect the appeal was often more sub-textual than people realized, both with The X-Files, Millennium, The Lone Gunman spinoff, and Harsh Realm. These shows reflected a real unease with modern society, not only a mistrust of the Government and all established institutions, but the Utopian ideal of technology and progress, that having a disconnect from the cosmos, from spirituality, can have real consequences. None of Chris Carter’s work offered easy answers to modern society, and mostly raised questions, but the themes of the work seemed to offer a few road maps with how to navigate in an increasingly disjointed world.

In spite of the 90s being fairly placid in the Clinton era, excluding the partisan battles of the decade, the economy grew and many seemed outwardly optimistic, but there were whole circles of younger people, college-aged students, that felt this unease, and tuned into The X-Files on a regular basis through the bulk of the decade. For example, one could compare The X-Files phenomenon to the epochal Pink Floyd album “The Dark Side of The Moon” from 1973, an album that also addressed issues with the same kind of unease with modern society. Things have fundamentally shifted globally since the 1990s; one only has to look at the evidence to see that our society is in a mess.

For decades there have been complaints about the decline of society. Many argue that always been the case with each generation, but there seems to have been a shift, a decline that most can’t ignore. We see a growing mistrust of government bureaucracy, with a highly dysfunctional congress and inertness in America. A growing disillusionment with scientific research–evidenced by more corruption and fraud and a lack of faith in profit-driven university academia–we see growing divides within intuitional religions with fundamentalism taking far too great a hold, and driving decent people to abandon places of worship. We see misplaced priorities within Wall Street over Main Street–we first saw pensions in the private sector eliminated in exchange for the promise of 401Ks, which turned out to be worthless. Now we see the gutting of pensions in the public sector being gutted by certain State Governors under the guise of austerity. The cutting of as many safety net programs as possible under the guise of austerity, and ignoring rampant unemployment. We also see a health care system corrupted by too many high costs, where the share holders of profit-driven hospitals take priority over the needs of the public. As well as the manufactured revolt by partisan sides over the passage of a flawed health care bill to control costs.

We see the byproduct of a lack of regulation on the environment, more toxic spills, or the digging of materials through fracking which is causing unexpected and unintended consequences, unexplained earthquakes for example, and a rise in extreme weather in America. As well as more extreme conditions in various parts of the world. We see more of a shift toward plutocracy than ever before in my lifetime, with a barrage of false accusations, hyper-patriotism, and other mis-directions to distract the public. Some of these distractions include the rise of the technology base: gadgets to sooth the public, such as smart phones, Ipods, Ipads, smaller laptops, hand-held games, social networking, and apps. All of which can isolate people, aside from, or opposed to the argument of bringing them together. An education system that has just about eliminated critical thinking skills, and has become more effective in stifling individuality, through standardized testing and learning by rote and conditioning. You also have a growing demographic of people in their twenties that can see through all of this, and are trying to create their own pockets of a social movement and are finding greater difficulty in doing so. In addition to rising tensions in Europe and revolts against the European Union, with several key countries that seem to be modeling themselves on China, the benchmark for oligarchy and plutocracy, notwithstanding the growing problems in Latin America and some of the real crises that the media doesn’t report on.

Ironically, most pop culture venues are in bad shape. The print publishing industry is in trouble, with many established contemporary writers finding it harder to get works published, with growing cuts to budgets, and the downsizing of publishing staffer, as well as a shift to digital publishing like Kindle. The music industry is also in trouble. While MP3 file sharing is often made the scapegoat, it is the industry’s indifference to consumers, the inflated price of merchandise, and the price of live concert performances reaching such obscene levels as to demonstrate a real disconnect with the working class, that have all triggered a revolt against the industry. With just about all of the significant acts of the 90s, the grunge and alternative explosion that The X-Files had such an affinity with, gone. Including most of the mainstays for decades, your Stings and Phil Collins put out to pasture. Rock has been replaced on the radio playlist, first by Hip Hop, and then by some of the disposable pop acts--your Justin Beibers, Lady Ga Gas, or Miley Cyruss--that only a tiny sliver of underground music exists. Most of which is less artist-driven than producer driven, and the Svengalis that people so feared have come to fruition. Leaving the average listener feeling empty, and with little to connect with. Even the film and television industry are in growing trouble. With the demise of countless small studios–and the co-opting of genre pictures into the kind of tent pole events that just over saturate the consumer–and out of control budgets that many now admit are not sustainable. Most genre fans of fantasy, science fiction, horror, and superhero comics should feel satisfied, but many fans feel the satisfaction is hollow. The decline of alternative forms of art leave many people with no means to get their barings in the world. Many of the issues with television we’ll get to in a moment.

There is a growing feeling that all of this is culminating into a key crossroad, with a set of choices that many fear will reach a point of no return. In essence, to summarize, the world is in a mess.

Therefore it seems like the apt moment for Chris Carter to offer up a new statement on modern society. Since 2002, countless shows have surfaced to replace the spirit of The X-Files. Some of those shows like Lost featured X-Files alumni, I know people who watched Fringe as a way to satisfy their ‘X-Files Jones’, but for myself, it just never had much impact. You had shows like Supernatural, and Warehouse 13 (a show where I personally know one of the producers and writers as we were high school classmates), that are satisfying to a degree I guess, but still just don’t capture the elements that made The X-Files so important. Many of these shows, and new incarnations always coming up, sound the notes without playing the music. Mind you, many of these shows are well done, with an exceptional pool of talent attached to them, but they just seem like imitations. I have no idea how’s Chris’s new offering will be received, but one has always suspected that Chris Carter has always been Hollywood’s ultimate outsider. Personally, I am happy he is that outsider, we need those kind of figures and writers of substance, be it Rod Serling, Leslie Stevens, Gene Roddenbery, or Chris Carter.

A spate of interviews and features have already circulated here and here, and IMDB already conducted its own poll about which series Amazon should pick up. The X-Files Lexicon has just released its own interview with Chris Carter. Speaking for myself, and the efforts of others, gambling on Chris Carter and advocating his work, is a far better bet to place, and something I’m not regretting, whatever happens.

Special thanks for XScribe for editorial assistance.
Posted by The X-Files Lexicon Blog at 3:23 PM 1 comment: