(The following is pure speculation and observations, possible true and false assumptions, there’s nothing definitive in the following points. -MA)

"All modern thought is permeated by the idea of thinking the unthinkable." – Michel Foucault

Recently there was a documentary on the History channel about sixteenth century Seer Nostradamus and the alleged Lost Book. It would be an understatement, but Nostradamus is more in fashion now then he has ever been, everything, including such as speculative shows like "The Nostradamus Effect" which explores prophecy, to the Heavy Metal act Judas Priest, releasing an epic two disc concept Opera about Nostradamus’s life, is in circulation. It is rather interesting that Chris Carter would so shrewdly reference Nostradamus in the first season and the pilot of Millennium. Fittingly and by random chance, in 1994, at the height of the momentum of The X-Files, Italian Journalist Enza Massa, while visiting the Italian National Library in Rome, stumbled onto an unusual find, a manuscript dating to 1629, titled: Nostradamus Vatican Code, the author’s name was inside, Michel de Nostradame, and was handed down by the prophet’s son and was later donated by him to Pope Urban VIII, thus began a wave of controversy that remained little noticed by the general public for a long time.

Michel De Nostradame was born in December between the 14th and 21st, 1503, in Saint-Remy-de-Provence, The south of France. While little is known about his childhood, at 15, he studied at the University of Avignon until it closed a year later due to the outbreak of the Plague, after eight years of traveling and studying herbal medicines, he entered the University of Montpellier, yet soon was expelled after his years of being an apothecary, a manual trade forbidden by the university. After which, his fame rose after he created a "Rose Pill" that supposedly protected against the plague. His first wife and two children died of the plague in 1534. After having pursued a spell of travel including alleged visits to France and Italy, he returned to his place of origin, and assisted prominent physician Louis Serre in his battle with a plague outbreak in Marseille and Salon-de-Provence.

He met his second wife, a rich widower and had six children with her, three daughters and three sons, in 1547. By 1550 he began writing his first almanac. These Almanacs, taken together, is believed to have included at least 6,338 prophecies as well as eleven annual calendars, his fame grew as a seer, and Medieval Astrologer, and it brought him to the attention of various noblemen and prominent figures. Around this period, he began taking on his most famous project, and published his book of one thousand quatrains titled Les Propheties (The Prophecies), written in a cryptic stylized hybrid, incorporating Greek, Italian, Latin and Provencal. By 1555 he offered counsel to Catherine De Medicis, the queen consort of King Henri II of France. Such access gives him protection from a court that would have otherwise executed him for heresy at the height of the Inquisition. Nostradamus died by June 1566 due to Odema. It is believed that the lost book, Vaticinia Nostradami were watercolor drawings created by his first son Cesar de Nostredame, probably when Cesar was a boy of twelve, the dates of these images could not be determined accurately, but there is a postscript dated 1629. The reason why some believe this book of images has a bonfire connection to Nostradamus has to do with the fact that several images correspond with several known Quatrains that some believe have already come to pass.

The Lost Book and Quatrains

The following article isn't really interested in regurgitating interpretations about Nostradamus's Quatrains or the collection of watercolors that are tied into his work. It's really more of the general Longview perspective about the symbolism of his work. There has always been wide controversy about the legitimacy of Nostradamus's work, and his ability as a psychic prophet. Often proponents of Nostradamus will site various 'hits' within his quatrains, the most famous being of predictions of three anti-Christ's, one being Napoleon, the second being Adolph Hitler.

From the deepest part of Western Europe,
A young child will be born to poor people,
Who will by his speech seduce a great multitude,
His reputation will increase in the Kingdom of the East. – Century 3, Quatrain 35

Beasts ferocious with hunger will cross the rivers,
The greater part of the battlefield will be against Hister.
Into a cage of iron will the great one be drawn,
When the child of Germany observes nothing. – Century 2, Quatrain 24

There has always been a number of serious issues with Nostradamus's work, all of his quatrains operate within a random order, none of his quatrains are sequential, and are open to wild interpretations. While at a superficial glance this would appear to be a hit, skeptics have pointed out problems with translations as well as the mere coincidence of his Quatrains, at the time of Nostradamus's life, "Hister" referred to a geographical location near the Danube river, most of his quatrains were written in a vague, cyclical, cryptic style, and therefore they are prone to interpretation and assumption, that over the course of hundred of years, that some historical events would line up with his predictions, just by coincidence.

Another example of am argued ‘hit’ would be the following Quatrain:

Earthshaking fire from the center of the earth
will cause tremors around the New City.
Two great rocks will war for a long time,
then Arethusa will redden a new river. – Century 1, Quatrain 87

Which many believe is a reference to 9/11. A parallel to that Quatrain is the following watercolor sketch, Plate 46 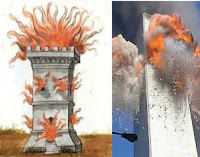 There's a fundamental problem here, first with that Quatrain, Atethusa, in Greek mythology is a nymph and the daughter of Nereus, a Titan who is referenced as the old man of the sea, who was said to be a shapeshifter with the power of prophecy, the symbolic mythology of Atethusa, is one of transformation. Unless the last line references this as a transformative event, there’s no geographical reference that would connect this line to the middle east or Iraq war. Then there’s the problem of the image, a burning medieval tower could have any connection, aside from 9/11.

While the following point may seem flip, one could read Book of Revelation prophecy in some of Salvador Dali's surrealist work, if one was inclined to do so, as could be illustrated here, in his work The Temptation of Saint. Anthony;

The Millennium episode, "The Sound of Snow", referenced the following Quatrain 70, Century Six,

Chief of the world will the great "Chyren" be,
Plus Ultra behind, loved, feared, dreaded:
His fame and praise will go beyond the heavens,
And with the sole title of Victor will he be quite satisfied.

Now, what do we make of the word, "Chyren"? In this episode "Chyren" would usher in the end of the world and Judgment for all. The episode dealt with cassette tapes containing white noise that would make the listener hear the things they fear the most and this would triggers deadly hallucinations. One character comments, after comparing the ability of whales to hear for a thousand miles, that humans don’t hear very well, perhaps, an implication that most of us fail to observe the coded messages, and symbolism that surrounds us? The episode also references Saint Peter's gate, and the theological Christian view that not everyone will pass through, "Our pasts are what we are," One character explains, "Every choice has it's consequences."

It has been suggested, by some, the word Chyren, references an associate of Nostradamus, Pierre Plantard, who was known to use the pseudonym, Chyren, and is believed to have authored an unpublished manuscript, "Le fabuleux Tresor de Razes" under the name Louis Chyren. Now here’s where it get’s interesting. Chyren could be interpreted as Cheiron, the famous Centaur in Greek mythology, who taught the Hermetic sciences to Ophiuchus, The Serpent Holder. We'll get back to this in a moment. This Quatrain has been interpreted as relating to the future Anti-Christ. Cheiron is known for having a duel nature, and so this could be interpreted in two fashions as a prediction of destruction, or a new era of enlightenment, we’ll get back to this later.

Special thanks must go to the following sites, Ellie's Lost Book of Nostradamus page, The History Channel, as well as Seven Star Hand's work.
Posted by The X-Files Lexicon Blog at 5:39 PM 2 comments:

Perception and the Unexplained...

Recently, I’ve seen a lot more discussion about aspects of the UFO phenomenon,
namely what these extra-terrestrial, or ultra-terrestrials could be. I have no more answers then anyone else on the credibility and speculation of these issues. I have recently revisited a fascinating documentary from 2004 that I highly recommend, "What the Bleep Do We Know?", which mostly deals with physics, religion, and, in part, perception. There’s one fascinating segment that deals with an account of what indigenous people of America, in the Caribbean saw when Columbus was arriving in the new world. The natives could not see the approaching ships, it was the Shaman who for many days, watched the changing patterns in the water until finally they saw the on-coming clippers, it was the shaman who the natives believed and trusted that caused them to see the ships themselves. Due to present neurological scientific research, our receptors, our eyes, ears, and senses, receive four hundred billion bits of information per second, yet our brain only process two thousand bits per second, think about that. In other words our brain imprints the ability of what we can see. We can only see what we believe is possible.

A second point in this documentary touches on an experiment conducted in Japan, with the notion that ideas, words, and thoughts could alter the molecules of water, the point being that if an idea can alter the nature of water, what could it do to our own bodies? That’s a pretty astounding notion. If we create our own reality, isn’t it possible we create our own inhibitors to what we can perceive?

Now, taking a leap with what is going on with the UFO phenomenon or our exposure to ET / UT’s. Chris Knowles recently disclosed his thoughts on aspects of the UFO phenomenon, and theories about Ultra-Terrestrials.

I won’t reiterate here all of his points, but I welcome everyone to take a look. The only point I will add is, what if these Ultra Terrestrials are more evolved variations of ourselves, humans that have mastered time travel, and are visiting us to influence, shape our present to insure our future? Which brings us to the main point cited, perhaps what has been referred to in the past as Angels, Demon’s, Farries, or at present Greys, are all part and partial of the same thing? Even that idea, that our future race, perhaps not even from earth anymore has traveled back to our present would boggle the mind, and operate beyond all of our point of reference, but perhaps this entire issue is far more Terrestrial then we’d like to accept.

Connecting this idea with the framework of that documentary, if we only have a framework, or a point of reference, wouldn’t it make sense we interpret these visitations as Extra-Terrestrial?

On the day we are able to open the floodgates and able to widen our perception, taking in closer to that Four hundred Billion bits of information we presently cannot process, will the construct we operate under be radically altered? Could we have contemporary shaman’s that are helping to alter the reality we presently create?

Maybe H.P. Lovecraft was right when he spoke of elder gods that would drive mortal men to madness upon seeing, and grasping. Perhaps it will all depend on the kind of personal heaven and hell we bring into that processing. Just something to ponder.
Posted by The X-Files Lexicon Blog at 3:38 PM No comments: