Belief From A Third Eye

"Belief From A Third Eye."

A review of Robert Shearman’s critical guide to The X-Files, by Matt Allair 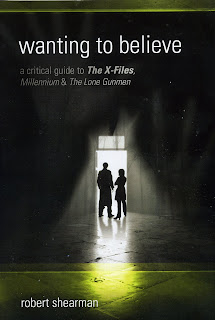 Episode guides, as well as reviews, seem to be a common aspect of fandom, as well as the product made available to fans. Why we are drawn to this material is an interesting question to ponder; it might have to with this desire to connect with others, and this search for validation, to seek a confirmation that others share the same opinion about any given episode. Perhaps it has to do with gauging others’ reaction to collectively shared material, and perhaps that by gauging that reaction, it confirms our own thoughts about specific episodes. That’s one of the reasons why such a site like The X-Files Lexicon was created. Whatever the case, there seems to be a continuing market for product that deals with analysis and criticism. Robert Shearman has aimed to appeal to such a market with his newest book and first piece of work critiquing a series he wasn’t directly involved with: "Wanting to Believe: a critical guide to The X-Files, Millennium & The Lone Gunmen," published by Mad Norwegian Press.

The trend of established authors writing critical pieces is nothing new of course, and this also applies to reviews of genres. Stephen King wrote his critical work Danse Macabre at the start of the 80s, and then there is H.P. Lovecraft’s famous piece, Supernatural Horror in Literature. In a sense, Robert Shearman is following in that tradition by honoring his attention to the productions of Chris Carter. The book is unauthorized, and Mr. Shearman had no connection with anyone from Twentieth-century Fox and Ten-Thirteen productions, which naturally allowed him an objective freedom to access the shows and episodes on their own merits. The book is structured in a chronological order based on air date. In other words, Seasons one through four of The X-Files is reviewed, and then season one of Millennium, season five of The X-Files and then the second season of Millennium, then The X-Files feature, and so on…The intent of doing this seems to be to lay out the progression of the shows in the order in which they were produced by Ten-Thirteen Productions during this period.

The book is laid out, after a very personable introduction that really captures the anticipation that was building up, prior to the release of the film, "I Want To Believe," with a brief synopsis of the episodes for both shows, as well as synopsis of the X-Files films, written by Lars Pearson, and then a critique from Mr. Shearman. The usual information of the writer, director, and air date is provided, however, from a technical standpoint, this is my biggest complaint about the book, as I would have preferred the inclusion of each episode’s editor and cinematographer, as I have always felt that those technical areas were equally as important in shaping key aspects for both The X-Files, and Millennium, as were the writers and directors that told the stories.

This brings us to the most fundamental point about this book, the critiques. Do they achieve their intended aim and are they engrossing to read? The answer is yes. While I personally might fundamentally disagree with some of the critiques, and I do, that is beside the point. Critiques are objective, after all. It is Mr. Shearman’s prose style, his sense of humor, as well as a kind of lightness to his writing, that approaches the reader in a way that is relatable and that manages to not condensed to the reader, even when he is being scathing about his lowest review markings of episodes. While he is candid, he doesn’t strike me as malicious, and he does clarify his arguments frequently.

I should obviously concede a point that some might raise--if this judgment is based on the merits of the book or colored by an awareness of his high regard within the British critical community? My reaction is based on the fact that it is a well written, engaging, and entertaining read, which fans might enjoy, or appreciate, even in cases where they don’t necessarily agree with every critique. I hope that his forthrightness will not a stumbling block for which to give fans to a fair opportunity to judge “Wanting To Believe” on their own, as many might find the book quite valuable as a casual resource.

Special Thank you to XScribe for editing this piece.

Please check out our exclusive interview with Robert Shearman
Posted by The X-Files Lexicon Blog at 8:55 PM 1 comment: