While the following is a little unusual for here:

Erica Fraga, also known as Raskolnikov, has kindly asked that we post her new promo for her upcoming book, LAX-Files. 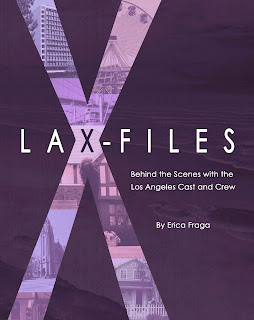 This is a fan made book dedicated to the memory of the late and great television director, Kim Manners.

Kim is known for his prolific and emotionally captivating work on Booker, 21 Jump St., Brisco County Jr, Simon and Simon, The X-Files, and Supernatural.

Since its inception in 1993, The X-Files has opened up our minds to government conspiracies, alien life, and unexplained phenomena. Nine seasons and two feature films later, The X-Files is still considered one of the most iconic television shows of the 20th century.

Join over 40 Los Angeles fans, cast, and crew members, including Chris Carter, Gillian Anderson, David Duchovny, R.W. Goodwin, and Laurie Holden, as they share their behind the scenes memories - some never before told - of working on The X-Files: Fight the Future and Seasons 6 - 9.

Interested in visiting actual filming locations used for the series?

LAX-Files details the most popular Southern California X-Files locations, including William’s birth place, the mansion from How the Ghosts Stole Christmas, and the Federal Building from Fight the Future.

All of the books profits will go to the American Cancer Society, the charity of the Manner's Family choosing.


Thanks for all your support

This looks to be a worthwhile read.
Posted by The X-Files Lexicon Blog at 8:57 PM 1 comment:

While recently working on a CD review for "Songs in the Key of X", and while appreciating Nick Cave’s contributions, I came across an astonishing piece of video media. Someone had compiled a piece for "Dread the Passage of Jesus, For He Will Not Return." or "Time Jesum Transeumtum Et Non Rivertentum". While I don’t agree with some of the visual selections, as I feel they are misleading, and complicate the interpretation. This musical tone poem isn’t a celebration of faith, or resurrection, but a lament, but it is unclear what it is a lament of.

The origin of the line: "Dread the Passage of Jesus, For He Will Not Return" was a line repeated by Monks in the middle ages, and interpreted to mean that when Jesus comes, you need to seek the chance, as well as a reference to a comment from St. Augustine. But the line is spoken by Demon’s, and so it could be interpreted as a warning to not be fooled by the Demon’s deception. One way of interpreting Nick Cave’s recital - and one more in line with the intent of the piece - is that this is a Lament over our disconnect with the universe, or our disconnect with spirituality. Dogmatic religions will often complain about our secular society, yet it is often driven by their own agenda, perhaps the complaint really should be about our disconnect with spirituality.

A friend recently commented to me that one can consider themselves 'Religious', yet that doesn’t necessarily mean they are 'spiritual'. This disconnect with the universe was a fairly regular, implicit, theme within The X-Files, and Millennium. The music manages to be full of implication, as well as Nick Cave’s reading, to support the idea of a lament. Our modern crisis, might have to do with this spiritual disconnect, and I don’t mean within any kind of religious dogma, but a disconnect nevertheless, from what ancient civilizations understood, that all things are indeed connected, and that we are connected to everything and each other. By the season final of Millennium in the third season, Jordan Black points out that ‘we are all shepherds’, and perhaps, by extension, we all are shepherds in our relationship to the Universe. It should be noted that the track is open to all kinds of interpretations.

Chris Carter, at one point, promised that the tracks off of "Songs In the Key of X" would make an appearance on the show. It is indeed a shame that this track never made an appearance on either The X-Files or Millennium, as it would have fitted in well.
Posted by The X-Files Lexicon Blog at 12:10 PM 1 comment: