The next review of the IDW comic, Millennium for issue three is another good piece of work from Benjamin Billings. The issue was written by Joe Harris, with art by Colin Lorimer and Joana Lafuente. 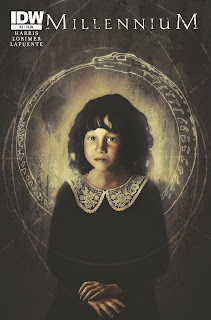 
While the first issue of the new Millennium comic series by IDW was marked by deliberately building dread, the second issue exceeded all expectations and delivered a riveting ride full of terror and revelation. Is it possible for the third issue to match out raised expectations? Let’s dive in and find out. As always, spoilers are everywhere.

This book starts with Frank racing through the rain in a graveyard. Last issue left us in a café so this jump is slightly jarring. He finds Catherine Black’s grave, and after seeing her in a vision for a moment, he lies on his back above her resting place and proclaims that there is no place he would rather be. The shot widens and we see several cars and men in suits. Millennium agents?  FBI agents?  We are not told who, and then Jordan Black, his daughter, comes running to him.

If you watched the television series you know that Catherine was his wife. She died of a Marburg-like virus in the end of the second season in the episode, “The Time is Now.” Her death came with terrible irony, because she is yanked from Frank Black just as the two were reconciling after a period of separation. Her death was directly caused by the Millennium Group, who gave Frank one dose of a life-saving cure and forced him to choose between his wife and daughter. In the end, Catherine chooses, and she chooses Jordan and pays with her life for that choice.

After turning the page we find out these events transpire 24 hours in the future. I think this is a mistake in pacing. With the very limited space there is to tell this story, it seems wasteful to snap back and forth in time. I sincerely hope that these issues are collected in a more durable edition in the future but truthfully this transition is only going to confuse the reader more in that format. Especially when the present time shows Frank back in the café we left him last issue. The storytelling is too tight to have to resort to these sorts of story-telling devices to keep me reading. In fact, these tricks only serve to muddy the water.

The café scene is masterful though. Frank is signed in to the computer and his immediate attention is on information about Monte Propps, the killer from the first issue. Quickly though, his attentions turn.  He decides to look for his estranged daughter. The waitress comes by and seeing her picture asks if that is his daughter and mentions that she would love to see her father after so long. Frank begins to threaten her, but she interrupts him and asks if she can freshen his coffee.

It is all taking a toll on him now. Too much has happened and too soon. His nerves are jangled and he does not trust his instincts. He backpedals on the threat and suddenly the waitress announces that he has an invitation just as an email arrives. The message says “HELP ME, DADDY” and as the waitress watches, another message arrives that says, “COME HOME.” The waitress reveals she is indeed more than she seems and says, “Safe travels, Mr. Black.” The next panel is too good to spoil but again, masterfully done and expertly captures the style and mood of the show.

The next scene takes us to Fox Mulder working with a couple of hackers to get into some Millennium “Deep Web” databases.  They are largely unsuccessful and the hackers suggest Mulder might need a body to get in because “access to the database is a highly personalized experience.”.

This scene holds my second quibble with this issue. The hackers talk about information they found on a black hat message board a few years ago. It is hard to believe that such knowledge would be out there and to the degree that it was, sharing it would likely be a death sentence for that person.  They even know that phrases from science fiction were used as passwords and they attempt a brute force attack to get in. (Two points if you remember Frank Black’s password.)

This scene ends with them checking on Franks’s whereabouts and find he has bought a one-way ticket to the Seattle-Tacoma International Airport and transitions nicely to find him in the airport. A driver is waiting for him and this opens the second great exchange of the book.

The driver will not tell Frank where he is taking him, though Frank pushes pretty hard and suddenly he has another vision of Catherine who tells him that “We’re all waiting for you.” Frank yells at the driver to stop the car and then without waiting, dives out of it.

It is dusk and rainy and we are moments away from the scene at the start of the book. An assumed tranquilizer dart hits Frank. He is lying on the ground when we see him call his daughter’s name and see her face.

The next scene opens with Frank waking with a start. Looking out the window he sees the space needle and knows he is still in Seattle. He reaches for the phone and a voice in the blackness tells him he will not need it. A man in a suit is sitting in a chair in the shadows and reveals that Frank has been unconscious for three days. The man introduces himself as a part of the Millennium Group and in a moment of pure comic gold asks Frank if he knows he has the same name as the lead singer of the Pixies. Frank does not appreciate the joke and roars, “Where is my daughter?” Seizing the man by the throat, he demands to know where she is. The man continues to offer his opinions about which Pixies albums were the best. Frank grows exasperated and lets the man go only to grab a sword that is hanging on the wall. The man tells Frank that even though the world did not end, nothing has changed.

Frank tells the man that he “..can’t think of any reason why I shouldn’t send you straight to Hell if you don’t bring me Jordan Black now.” And then a third voice is heard that says, “So let me give you one, then.” It is Jordan herself, grown. She tells him to release the man and when he asks her why, she tells him “This is who we are.”  The final panel shows an ouroboros necklace around her neck.

There are some amazing things in the closing moments, and the voice of this man who has been pushed past the brink is so clear.  When I read it I could hear it in Lance Henriksen’s voice.  The dialogue is absolutely pitch perfect. The second thing that will haunt you is the look of hurt and betrayal on Frank’s face as he realizes before she says it, that Jordan has joined the group that has killed her mother and his wife.

This issue is very much worth reading. The minor quibbles I have should not discourage anyone from buying and reading it. I am very much looking forward to the next installment and hopeful that this high level of content continues.

Special thanks to XScribe for editorial assistance.
Posted by The X-Files Lexicon Blog at 10:35 AM No comments: