"The Old World Falls Away"

We are pleased to present Christopher Irish’s review of The X-Files FAQ by John Kenneth Muir. Published by Applause books, 2015 – Matt Allair 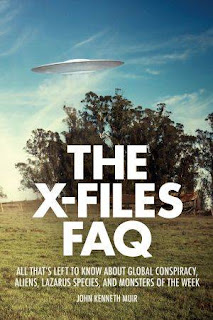 This book was a very informative and useful resource for seasons 1-9 of The X-Files, as well as both movies. It had a lot of information regarding the background of the series as well, which was very interesting to read. The book itself begins with the actors and background talent that brought Chris Carter’s vision to life. It covers seasons 1-9 by Muir selecting a few episodes and giving an overview.

First of all, this book was a real treat to review. John Muir has a very firm grasp of the material, and it shows. His 368-page, 31-chapter book covers a lot of ground regarding The X-Files series as well as both films. We discuss his book, as well as a plethora of topics related to The X-Files and Chris Carter, in an interview that will also be posted to The X-Files Lexicon.


The first three chapters of the book address inspiration for the series, and the creative power and actors involved. I found the chapter regarding the inspirations for the series particularly interesting. There are a few that are fairly well known to most fans, like The Twilight Zone and Twin Peaks, but there are less-known series that Muir mentions, like The Invaders and Beyond Reality. This is a great source for anyone who might want to watch any of these shows. The next chapter covers the talent behind the camera: the writers and directors, including Chris Carter, who have all put in hard work making the series what it is today. It’s a great chapter to me because I always found the writing for the series to be excellent, and each writer has a distinctive style, and each episode they made has a certain feel. Almost the same as each season has a different tone and arc to them. Muir details each director and writer excellently. Another entry in the chapter discusses Mark Snow, whose contribution to the music of the series was indispensable. Muir acknowledges that the whole series was a special epoch for American pop culture, not just in the 90s, but also beyond. His chapter that covers the stars of The X-Files is also very informative. David Duchovny, Gillian Anderson, and others are featured in this chapter. It’s not a very long chapter, but it does include some interesting information regarding the actors we’ve spent so long following both on The X-Files and in their various other projects. 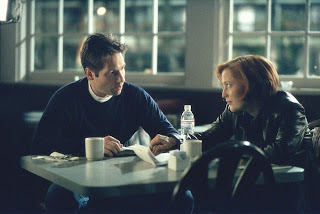 Chapters 5 and 6 relate to the pilot episode and the opening montage. Scully is clearly suspicious of Mulder’s methods, and Mulder is suspicious of Scully’s intentions. That first moment in the show when we see the silent Cigarette-Smoking Man observing as Scully receives her first assignment to follow Mulder’s work sets the tone for the beginning of the season. The lost time and alien involvement in the pilot really sets the series apart from other science fiction on the big or small screens. Generally, the depth in the genre was lacking during that period. His notes regarding the pilot episode are insightful and on point. As for the opening montage, what can be said other than it’s one of my favorites of all time. Oftentimes, personally, if I watch a show I get tired of seeing the same opening repeatedly. I’m not sure if it’s out of nostalgia or if it’s just great, but I never skip The X-Files’s montage. Muir covers the details of the montage and goes in depth on the scenes and images throughout.

Chapters 7 through 15 address every season of The X-Files. The level of detail that Muir goes into for each season is amazing. He really knows what he’s talking about, and it doesn’t come across as condescending at all. In our interview, Muir told me that he still has moments when he watches where he picks out details he might not have noticed the first time through. This notwithstanding, Muir’s grasp and knowledge of the entire arc of The X-Files is vast. In each chapter he highlights a handful of key episodes in each season that warrant deeper discussion. If he covered every single episode of the series, it would far extend the 368 pages the book already is. I have no doubt that Muir could easily expound on each episode though. His choice of episodes to review is great. Some episodes he discusses might have been overlooked compared to others, and others (like the infamous “Home”) practically scream for details. Like I mentioned before, each season has a certain tone. Again, Muir comments on this subject in our interview, but his book covers each season very well. The manner in which Muir handles the reviews really lends itself to both longtime fans as well as any newcomers who want a deeper appreciation of the series.

After addressing each season, Muir has a chapter titled “Do You Remember the One Where?” that covers pivotal moments in the series. The highlights are from various episodes containing important moments that affect the rest of the series. If you are a newcomer to the show, it would be best to follow along with these moments rather than read ahead, just to save yourself any spoilers. If you’re an old fan, this chapter is a good way to get refreshed on important moments throughout the series. 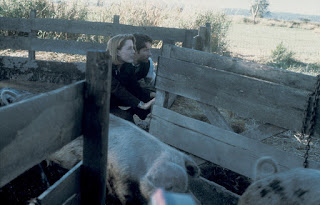 The next chapter was one of my favorites from the book. Muir covers a few of the most memorable Monster of the Week episodes. One of my earliest memories from the series when it first aired was “The Host” episode, where the parasitic man-worm creature injects larvae into its victim’s backs. There are a lot of memorable monsters the X-Files team dreamed up, so I felt this chapter was particularly entertaining.

Muir picks up on the technology-based episodes after he discusses the monsters. This is another running theme in the series as a whole, and definitely warranted a chapter devoted to it. The chapter covers a few technology-based episodes, including “Ghost in the Machine,” which I always felt got overlooked by a lot of fans. The way Muir reviews the episodes he selected make it so you want to take a harder look at them since the points he makes are valid. After he addresses this topic, he gets into another large subject The X-Files touches on: Christianity. Interestingly, this subject has always been an area where Mulder and Scully’s roles are reversed. Muir picks out a few highlight episodes with poignant moments regarding religion and The X-Files.

Next, Muir delves into Americana and The X-Files. He goes over some events from 90s culture and how The X-Files took from that culture and put its own spin on it. Again, he selects a few choice episodes that highlight how effectively the series made social commentary via real-world inspirations. Muir selects some really good episodes that demonstrate exactly what he’s getting at. I found the points he made very interesting and spot on. He then goes on to discuss serial killers throughout The X-Files in his next chapter. The series used the angle more often in the first few seasons, and Muir remarks on this fact. Chris Carter’s series Millennium picked up on the serial killer aspect of his imagination (and if you haven’t seen it before, you should. It’s excellent). After covering a few episodes and expounding on serial killers in the show, he goes on to discuss “Lazarus species.” This is another subject that eerily mirrors reality. I’ve seen plenty of events through the years where frozen viruses or just odd creatures get dug up from eons past. A lot of classic X-Files episodes like “Ice” and “Firewalker” revolve around this idea, and Muir covers them well.

Muir’s next chapter regards “Xenophobia and Ethnocentrism,” which are two subjects that have remained a constant problem in worldwide culture. The way The X-Files handled these subjects was very interesting throughout the series. Muir’s comments on this subject again are very spot on, and his selection of episodes is excellent. The next chapter brings up another massive part of our culture: teenagers and adolescents. Some of these episodes were among my personal favorites when watching it in the 90s. Watching these episodes now gives one a definite nostalgic feel for how the youth of the 90s lived. Granted, most of us weren’t abducted by aliens, or weren’t witches, but it was an interesting time regardless. 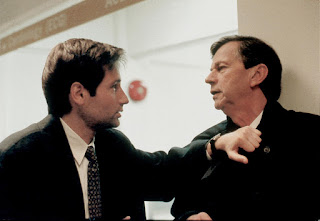 From these cultural topics we move on to the paranormal. This is a pretty broad topic for this series since the vast majority of it could be classified as “paranormal,” but Muir’s commentary is entertaining to read and covers a lot of good episodes. The way Mulder and Scully delve into the world of the paranormal varies and gives each character depth and progression. The next chapter gets into specific “based on a true story” episodes. Muir’s reflections on these episodes are interesting, and I honestly learned a lot of details on where these episodes sprang from.

After Muir delves into background cultural information in the last few chapters, he lists notable guest stars over the series. I loved this chapter just so I could review and see how many people actually appeared in the series. After this, he gets into the two X-Files films. The two movies are so vastly different, and the fan reception of them seems to be different. Muir’s comments on each are great to read, regarding both Fight the Future and I Want to Believe. After the movies, Muir devotes a chapter to other series Chris Carter made. Millennium, Harsh Realm, The Lone Gunmen, and The After are all shows Chris Carter created aside from The X-Files. Each series has a good summary written by Muir. Two of the shows (Millennium and The Lone Gunmen) tie into The X-Files, while the others are stand alones.

When a show is as successful as The X-Files, it’s bound to spawn its fair share of imitations. Muir mentions a lot of series that took a direct line of influence from The X-Files. To be honest, a lot of these series I never heard of. That made this chapter very entertaining to read, since it was a learning experience! Muir details each series in a summary of what the plot of each show was about. The last chapter discusses The X-Files’ legacy in other forms of entertainment, with the comic series (the old Tops issues as well as the new IDW series) and toys. The last entry is a bibliography for the book.

Overall, the book was very useful, and I enjoyed reading it. It covered a lot of subjects that influenced the show as well as the show itself. Muir’s writing conveys that he is a big fan of the show, not to mention an expert on the subject. This is a good book that any fan would benefit from owning, either as a quick reference or to delve deeper into the series for a better appreciation of it.

Special thanks to A.M.D for editorial assistance.

Please check out our exclusive interview in two parts, part one and part two, with John Kenneth Muir, you can find The X-Files FAQ at Amazon, or your local book store.

Posted by The X-Files Lexicon Blog at 2:36 PM No comments: