First off, my apologies for taking so long to update here.

One of the interesting outcomes of my recent interview with Bob Goodwin, was the connection I felt with our shared liking of old 50s genre films. I was very much tickled to look at the posters and lobby cards for “Alien Trespass”, it triggered memories of my avid interest in 40s and 50s Science Fiction and Horror posters, I had an huge interest in the subject when I was younger. I share many of the same favorites that Mr. Goodwin mentioned. Some include War of The Worlds, Earth vs. The Flying Saucers, It Came from Outer Space, Howard Hawk’s The Thing, invaders From Mars, the iconic The Day The Earth Stood Still, as well as such interstellar epics as Forbidden Planet, This Island Earth, and George Pal’s Destination Moon. Unfortunately, with today’s contemporary eyes, and due to the sophistication and production values that Sci Fi genre fans have become accustomed to, many of these films probably seem quaint or crude. By fans dismissing them, they miss out on an important part of pop culture history, and most importantly, many of these films for their time, successfully captured that sense of wonder that a 10-year-old holds. 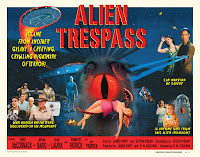 Much in the same way that, by the mid thirties, the Flash Gordon / Buck Rogers Universal serials with Buster Crabbe captivated children, and those serials were upholding the tradition of the Science Fiction Pulp magazines of that era. There’s something to be said for the naive exuberance of that era, before astronomical science had caught up to the point of changing the sensibilities of genre writers. One of my great collecting obsessions has been the premiere Science Fiction Pulp magazine of the 20s and 30s: "Amazing Stories." Before Steven Spielberg co-opted the title for his 80s anthology. "Amazing Stories" was a ground breaking publication in the mid 20s. below is a copy of the one of editions I have.

Yes, I’ll admit the aliens with the huge ears is hokey, but there was again a charm in the naïve exuberance to the magazine, the artwork, and the stories. Its publisher, Hugo Gernsback had as an interesting and compelling story, as compelling as the personal life of H.P. Lovecraft, or Edgar Rice Burroughs. Gernsback was an entrepreneur who was born in 1884 in Luxembourg, Germany and immigrated to the United States in 1905. He founded radio station WRNY in 1925, and was involved in the first television broadcasts and is considered a pioneer in amateur radio. He published "Modern Electronics" in 1909, as well as founded the Wireless Association of America. He created "Amazing Stories" in 1926, and it is generally considered that he founded modern science fiction by creating a magazine dedicated to the genre. He even founded the phrase "Science Fiction", although it was awkwardly dubbed "Scientifiction" in the beginning. He also wrote Science Fiction in 1911, "Ralph 124C 41+", although, it should be noted, it was an awkwardly written book filled with interesting ideas. The magazine depended on reprints of H.G. Welles, Jules Verne, and Edgar Rice Burroughs in the beginning, yet talented writers did start their publishing careers from the magazine, such as A. Merrit, and E.E. "Doc" Smith or eventually John W. Campbell. It could be argued that editor Farnsworth Wright for "Weird Tales", did recruit a more important and influential pool of talent for that magazine. But Gernsback’s important role should not be ignored. The "Hugo" award, given out by the World Science Fiction Society, is named after him. He died in 1967 in New York City.

I mention all of this, to remind fans, that is it important to be aware of the past history of certain genres, both on film and in print, as such knowledge can only enrich your appreciation of it.
Posted by The X-Files Lexicon Blog at 5:03 PM 1 comment: