Benjamin’s new excellent review is up for issue 4 of IDW’s Millennium comic, written by Joe Harris and art by Colin Lorimer. 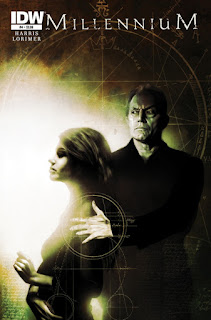 As the Millennium mini-series from IDW has progressed, Frank Black has found himself moving from horror to horror and from dread to dread as he progresses. This reader kept thinking that things could not get worse, but invariably they do. Let’s jump into issue 4 and see if the high quality we have seen in the first three books in this series continues.

Before we go any further, the usual warning that spoilers abound is appropriate.  Also, this issue touches some issues that some people may consider triggering. Please read this review and the book itself with that in mind.

If I could sum this issue up in one word it would be heartbreaking. There is so much loss, but yet still so much to lose and no easy answers or ways out. Issue 4 opens with a scene from 2011 at Washington State University. Jordan Black is attending a party at a frat house.  She faces some harassment but at some point one of the frat boys pushes her down.  It is not clear whether he sexually assaults her or is interrupted in the attempt. While the scene unfolds Jordan is having visions, but while her father tends to see the past through the eyes of the evil people he hunts, she sees moments into the future. Her vision provides her means of escape by suggesting she scratch the face of her assailant. She does indeed scratch him and then flees.

Running from her assailant she goes upstairs into the attic. I wonder, just a little bit, why a girl who has just suffered assault would run deeper into the house while her assailant is still there, and now angry with her. The crowd at this party has not seemed to be friendly to her, and we do not see her with any friends. Fleeing the place would make more sense, but she does not and another frat boy follows her.

The boy calls to Jordan repeatedly and she ignores him until he says, “Hey, I am talking to you!” She replies “Looks like a tough night for studs.” She seems almost unfazed by the attack she suffered moments earlier. Her vision once again gives her a glimpse of the future. The frat boy approaches and she begins to speak in a language that appears to be derived from Latin.  Google translate could not recognize or translate what she says. As she speaks the frat boy asks, “Did we hook up once?” ignoring what she is saying.

In a moment she is holding a knife. She holds it against her abdomen with the blade pointed up.  She seems to be neither offensively nor defensively postured, but finally gets the frat boy to see that something is not right here.  Jordan says, “And some of those understanding shall fall. To refine them, purify them…” The boy moves backwards away from her and losing his footing falls through a large window and lands on his back, dead, just as she saw in her vision. Jordan does not break from her strange litany, but continues “Until the time of the end… Because it is still the appointed time.” She slashes her palm with the knife and allows blood from her wound to fall onto the dead boy’s face.

The next panel frames Jordan in the broken window, and a man stands beside her.  He tells her “Congratulations. I knew you had it in you.” She does not look so sure. Her cool façade is broken with a look of worry.

Moving back to the present day, we find Jordan sitting opposite of Frank. The panels here are brilliant, with Jordan being shown in shadow while Frank is shown in the sun that is streaming through the windows. Her face shows the little girl we loved on the TV series looking more like a world-weary woman in her early 20’s.  Frank is angry.  The confrontation with her is powerful. Jordan reveals through dialogue that at some point Frank sent her away, and he never did much to help her understand her visions. She accuses Frank of putting her mother and herself through hell and reminds him, “I am not a child.”  Frank, inches from her face screams, “You are my child!” and then he reminds Jordan, “The Millennium group killed your mother,” but not before slapping her across the face.


As Jordan moves away from her father she sees him in a vision with a large demonic shape behind him.  The vision shifts and Frank’s visage becomes wracked with pain, while the shape remains behind him, wrapping him in umbral cords. Under its wings outlines of eyes appear.  She collapses.  After a brief exchange with a man Jordan calls Quentin (who may be the same man from the attic of the frat house), Quentin tells Frank, “They are ready for you now.”

Turning the page shows a meeting of the Millennium group.  Jordan and Quentin take a place at the table while Frank stands. The group members are cordial and welcoming but Frank is having none of it.  He tells them that he is leaving, “As soon as my daughter comes to her senses and does the same thing.” Quentin reminds Frank of the bond between patron and initiate.

Jordan, having heard enough from both sides, stands and tells everyone that their cause is the same. They all stand against Legion.

The scene shifts again. Here we see Fox Mulder calling Captain Giebelhouse. Mulder is looking for help locating Frank and also alerts Giebelhouse that the police are looking for Frank so he can answer some questions about Monte Propps’s death.

Now the scene goes back to Frank and the Millennium group. They explain that strange symbols at Propps’s death scene, the same ones that were at his victims’ deaths are a form of puzzle. It is a puzzle the group has yet to solve, but if Legion is on the loose Frank and Jordan are in grave danger.

I love this part of the book. The story is being progressed as we flash between characters. It takes a lot of skill to do this in a longer form.  To do it this well in a comic book is astounding!

The story ends with Mulder looking for Frank’s old house. He asks a hooded figure on the sidewalk if it is Frank’s house.  The figure confirms that it is and then says to Mulder, “We’ve missed Frank around here. Please, when you see him next... be sure to tell him that Lucy says hello.”

Any fan of the show knows this is Lucy Butler, a manifestation of Legion. This is the second time this series has sent a chill down my back. This series is being so masterfully done, keeping so well to the mood and theme of the television series that it is almost too good to be true. Simply amazing and well worth your time!

Special Thanks to XScribe for editorial assistance.

Posted by The X-Files Lexicon Blog at 11:15 AM No comments: