In early March, I had an unusual brief experience that could be best described as a minor psychic download. Often when I take brief rests - power naps - I will experience ‘micro dreams,’ - mental flashes. These are often images, brief voices citing names, musical phrases, dreams, the usual things people experience with free association unconsciously. Yet the context of what happened is important. From January until March, I had been steeped in reading C.G. Jung’s work, and I was also partaking in a ritual of hospital visits for a relative who was getting a weekly treatment, and I would take a rest in the lounge, and usually these waits would be a couple of hours. While resting, I had an experience that lasted for only a few moments, if not a micro second. After this occurred, I shared this experience with acqaintances on Facebook, and I was surprised by how consistent the reactions were with related experiences.

What happened didn’t feel like a typical micro-dream, or something you experience in that twilight space of a light sleep; somehow this felt a little different, more specific, a random moment that felt directed. 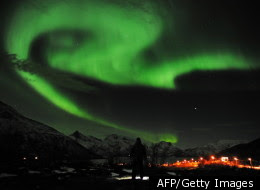 I had a rapid series of mental still images; mental photos of night skies, Earth bound events - auroras in various forms, light streaks, auroras in the shapes of gaseous spiral nebulas, gas orbs, and a rainbow at night. This happened on the cusp of Solar events that occurred in March, and more to the point, these images seemed like visual premonitions of future events unrelated to the solar activity in March. These nebulaes seemed like symbolic messages, and seemed related to the worm hole spiral that occurred in Norway the previous year. 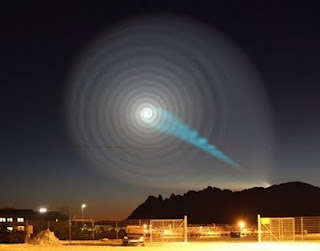 As previously commented on, Norway’s Spiral projection from December 2009.

At first, I was going to just leave it as a mental note and discard it from my attention, but perhaps the impact of re-reading Jung’s work told me to pay attention, and be mindful of this as an illustration of Jung’s Collective Unconscious. While I am aware for some their reaction would be incredulous for me to suggest the following, I have to wonder if this experience would have to qualify as a physic impression, beyond the mental purging of my unconsciousness of things witnessed but not consciously processed, as a Freudian would argue, but something received by an outside collective energy.

The experience reminded me of how creative inspiration often seems to operate within myself. Creative ideas often happen in my mind at random, when I least expect it, and often when I am in a relaxed state. Creative inspiration isn’t something I can just call up at request. There’s a nebulous aspect to inspiration that no creative person can fully answer.

While I don’t buy the Hollywood depiction of psychic phenomenon, nor buy that every psychic palm reader or medium that advertises in your local neighborhood is legitimate, I now have to wonder if psychic impressions are far more subtle, brief, mundane, and random than we have been led to believe…and that everyone might indeed have the capacity for it, if they pay attention to the clues.

That psychic phenomenon and intuition, are and aren’t as we assume, but just as interesting.

A number of people have shared with me their experience of having brief visions during a hospital visit, and have suggested that the stress of such an environment left them open to such an experience. There has also been a lot of circumstantial data that traumatic events leave one open to psychic experiences. Yet I don’t know if trauma has to necessitate a gateway to psychic events; if so, that would seem to be a cruel price to pay in order to expand one’s consciousness, and I do wonder if there isn’t another way to achieve the same goal. 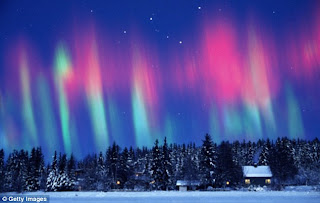 Within a similar timeframe, there were a series of solar flares that heightened activity with the Aurora Borealis, and the flare from the sun that some have hypothesized as a ‘star gate’ opening.
The image also reminded me of the initial poster for Star Trek: Generations, a story that featured a plot point that dealt with an energy field known as the ‘nexus’ – an idealized alternate dimension. Then there are the usual sonic flares depicted in Star Trek when a federation ship was moving out of warp speed. 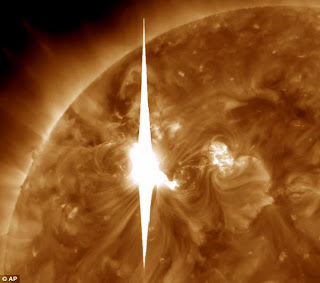 Sun flare events occurred March 12th, 2012, as reported in the UK daily mail; my experience occurred days prior to it. The ST: Generations poster from November 1994, tag line is interesting: “Two Captains, One Destiny.” can the tag line have multiple interpretations? 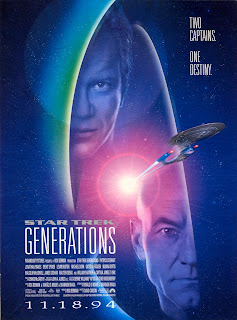 But by writing this acknowledgment of that experience, when I have spent years – decades -- not directly experiencing anything that would be deemed as ‘paranormal’, while maintaining a fairly open mind on the possibilities and a life long fascination interest in these areas. Writing this means that I have to claim the experience, and move closer to accepting these areas as legitimate. There’s a certain risk in doing do, notwithstanding that risk of consternation from debunkers and skeptics that it was a ‘trick of the mind,’ or an ‘overactive imagination’. There’s the psychological risk to incur.

I have described myself as agnostic and have characterized myself, like Fox Mulder, as someone who ‘wants to believe,’ yet I have held no personal experiences that would alter my perception on the issue. I have remained fascinated, yet neutral on the possibilities.

This has been a dilemma, and it reminds me of a key plot element in the season one episode, “Beyond the Sea” when Scully is visited by the spirit of her just deceased father. Scully is afraid to share the experience with Mulder, feeling that by doing so, she would have to acknowledge that such unexplained phenomena exist, stepping beyond her rational scientific point of view, that the acceptance of such possibilities would act as a kind of apotheosis, or aposiopesis, or a posteriori- a breaking off, or moving forward from comfortable convention, a fear of accepting something intangible.

This same kind of fear has been seen in countless examples of mythologies or religions, where a protagonist faces a trial by fire. Early in a common print editions of C.G Jung’s Archetypes and the Collective Unconscious,* he shares an account of a protestant Theologian. After Jung has defined water as spirit that has become unconscious, Jung writes the account:

The Theologian dreamed he saw on a mountain a kind of Castle of the Grail. He went along a road that seemed to lead straight to the foot of the mountain and up to it. But as he drew nearer he discovered to his great disappointment that a chasm separated him from the mountain, a deep, darksome gorge with otherworldly water rushing along the bottom. A steep path led downwards and toilsomely climbed up again on the other side. But the prospect looked uninviting, and the dreamer awoke.

Jung further hypothesizes that the dream meets violent resistance from the conscious mind. Aspects of this analogy very much resonated for me; this hesitancy that I have to contend with might be a protective mechanism, a concern that by embracing the possibility, by delving deep into the ‘rabbit hole,’ it could lead to enlightenment… or self-destruction, or to summarize, a leap of faith.

Indeed, there’s a real psychic and psychological risk to delving too quickly into these areas without being prepared. One of the problems with LSD and Hallucinogens, and in experimenting in them, without understanding the ritualistic aspects, that there’s a certain process that one should follow before entering into such spiritual openings.

Fox Mulder’s passion and obsession in exploring the unknown was so great that, in effect, by the end of season seven, he had become an X-File. While it was transformative, it also came at a price.

Yet perhaps these concerns are unfounded. Perhaps one will only take in and perceive what one is ready to. There are certain experiences I would not care to go through. When you consider the frightening accounts of alien abduction scenarios, poltergeist events, or the more aggressive Cryptozoology incidents, I would not want to go through such incidents. Yet I would welcome encounters from a distance, such as a UFO sighting, glimpsing a spirit.

In other words, an apotheosis that confirms there’s something greater than ourselves.
Posted by The X-Files Lexicon Blog at 9:18 PM 1 comment: