Recently, I was directed to a potentially interesting project that is ramping up, Office Paranormal, and is in the process of potentially casting a stellar circle of acting talent. While not completely official, the casting includes Nicholas Cage, Mickey Rourke, Eva Mendes, Val Kilmer, Haley Joel Osment, Christopher Walken, and Michael Madsen. A friend commented that the premise sounds like a knockoff of Ghostbusters, nevertheless, this sounds interesting and might reflect on the continuing market for Paranormal subjects, and while I suspect this has to do with the commercial success of Paranormal Activity, one has to wonder if the success of “The X-Files”, so many years back, was the template to illustrate that such subjects could be commercially marketable. Fittingly, this film is supposed to be released in 2012, a year that is considered an equinox for a lot of esoteric subjects.

I know almost nothing about the team of Joseph Guinan, and Chelsea Zotta, and I have to admit that Nic Cage’s commercial and critical track record has been hit and miss. Yet considering that Mickey Rourke has enjoyed such a successful streak as of late, it might be a good sign of Rourke’s involvement, in a sense, this is all Monday Night Quarterbacking on my part, so all one can do is be hopeful. I might as well come clean and admit to being a major advocate of actor Haley Joel Osment, since 1999, and his impressive turn in The Sixth Sense, and regard him as being deserving of the label given as one the best young actors of this past decade. Now that he has gone the Jodie Foster route, and graduated from NYU, I hope is able to make the successful transition as an adult actor.

I can’t really say if HJO might be able to maintain his commercial appeal as a lead actor, but I could see him as a solid, and excellent character actor, and Hollywood has had a rich tradition of supporting character actors whose careers are just as remembered and beloved as their known counterparts. After a phenomenal streak with The Sixth Sense, and A.I. – Artificial Intelligence, Haley dropped out of the limelight after 2003, to finish school and pursue NYU, and while he continued making smaller, independent films, most of these have yet to see the light of day, or have not been picked up by major distributors unfortunately. I suspect this is largely due to a shifting marketplace that hasn’t been friendly towards independents. For myself, it has been frustrating to watch Haley’s peers gain momentum, and this isn’t to take anything away from other acting talents, but there is no other young actor that matches his unique persona and talent, and none of his peers remind me of the great actors of the past, Jimmy Stewart, or Spencer Tracy.

So, I am naturally hoping, selfishly, that this film helps to put him back in the deserved limelight. We shall see.
Posted by The X-Files Lexicon Blog at 8:40 PM 1 comment:

Staying connected with the public... 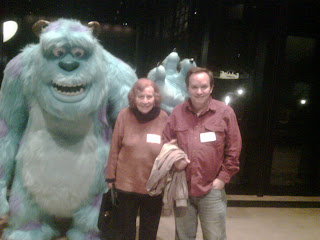 On Tuesday I had an interesting and unforgettable experience, a friend of mine, who belongs to the Producer’s Guild, will frequently invite me to free industry screenings of Hollywood features. He asked me to join him for a screening of "Toy Story 3" in 3-D, and naturally I brought along my mother, who is an avid fan of animation. What neither of us realized was that the screening was at, none other, than Pixar Studios in Emeryville. So, it was quite an experience to have access to the secure complex for a few hours, the grounds of the complex are laid out like a very sleek, 21st Century university, and the very history of the studio is laid out within the massive lobby.

Another perk of this screening, after the film, was an industry Q&A with Producer Darla K. Anderson, while I won’t reveal the bulk of the exchange; she did have some interesting answers regarding how Pixar stays connected with the Public. One of the general points she raised was that while an animated film is in production, it will be screened for family members of employees, as well as selectively screened for segments of the general public, and the film will be adjusted according to reactions. It is known that Steven Spielberg and George Lucas will go to movies along with the paying public, which I have always considered a very wise decision. After all, the public is spending their hard earned cash to attend a feature film at a Theatre, or Multiplex, and they have a right to expect value for their dollar.

Within Hollywood, it is common for industry people at attend free screenings, and it is an understandable perk: but it is also a two edged sword as well. Producer’s run the risk of becoming so insulated, and by doing so, losing touch with what a paying audience is connecting to. Often the entertainment media, and Hollywood is obsessed with the 'secret' to Pixar’s success - and the answers might be rather simple. Many Studios will, and can, cynically sound the notes without playing the music, of the Pixar formula, that is, to digress, if there is such a thing as a formula, which I personally doubt. The various production teams for Pixar have stressed the quality of the stories, as well as the care, and investment that goes into the characters they create, but a third secret to their success might be a willingness to stay connected with the paying public. In essence, they have found a way to follow the example of George Lucas and Steven Spielberg, through their low key screenings, while astonishingly avoiding the scoops of on-line spoilers, that is, to my general knowledge, I don’t recall any revelations from the countless on-line movie news sites that exist, and circulate spoilers at a heavy rate in many cases these days.

So, how is this relevant to The X-Files, you might ask, The producers at 1013 Productions shared a similar savvy, in the mid nineties, of staying connected with the fans, and were accessible in a way, thus setting up a template that other television series use today, that was unusual for the time. One can still find examples of the forward thinking approach that Frank Spotnitz and Chris Carter took with the public, while managing to not reveal plot points for the series. It was, indeed, a delicate balance. These are lessons that industry people need to continue to apply when considering the commercial material they release to the public.
Posted by The X-Files Lexicon Blog at 8:27 PM 4 comments: