X-Files Adjacent: War of the Satellites

Nothing exists in a vacuum as far as creative influences. The following is the first of a trifecta of critical reviews concerning a group of late-50s, low-budget Sci-Fi and horror films. Chris Carter, within the last few years, has acknowledged (aside from the Night Stalker TV movies) that The Twilight Zone, and The Outer Limits, were an influence on him. Recently, I saw a series of films that might have possibly influenced the writers for such series as Twilight Zone and The Outer Limits. 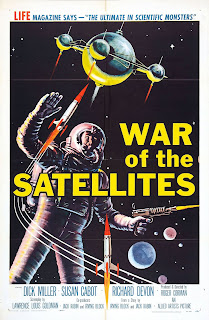 Produced and directed by B-Movie king, Roger Corman, War of the Satellites (1958) capitalized on the satellite craze of the period, triggered by the launch of Sputnik 1. The story goes that Corman pitched the film to Allied Artists, strictly on the title alone, with no script and with the promise he would have the film finished and released in seven weeks. He made good on the promise. After being given a budget of 70,000 dollars, Corman along with writer Lawrence Louis Goldman and Irving Block, built a story after listing what sets would be needed to be built first, and then developed a script to fit around the logistics.

It is with little doubt that Roger Corman has become an icon in the industry and is probably responsible for launching more careers, in as much as potential filmmakers and actors through his ‘Corman school of filmmaking,’ than UCLA and USC combined.

While the film is flawed and typical of the kind of production values from that era (in spite of the fact it becomes apparent after watching for about ten minutes, that you must throw science completely out the window, and the film is so cheap that lounge recliner chairs were used for the seating aboard the spaceship), for everything this type of a film gets wrong, it’s interesting to see, thematically, what the film gets right.

Several sequences reminded me of something you might find in an episode of The Outer Limits, or Twilight Zone. This film ends up being an idea-driven film. Now whether that was by design or something the writers stumbled upon out of necessity is the real question.

It starred Dick Miller, Susan Cabot (a woman whose demise would be as tragic and bizarre as an X-File*), and Richard Devon. After the destruction of the latest spaceship of the Sigma project to pass through an energy barrier somewhere in the solar system, Dr. Van Ponder insists to his colleagues that he will continue. Two high school teens (in the most awkward and corny segment of the film), after seeing a falling star that crashes, discover an alien satellite with a message for the UN.

An alien race from the Spiral Nebula Gamma views the human race as an infection, further adding that they are displeased by our efforts to move into the stars, and explain that have created this space barrier to restrain humans from space exploration. Dr. Van Ponder announces to the press that he plans to captain his own ship in the next design. His friends Dave and Sybil agree to go with him. The doctors plans include building the ship to use photon propulsion to travel at the speed of light. After getting a call from UN Counsel Leader Hotchkiss about efforts of the UN to stop the project, Dr. Van Ponder’s car crashes as a result of alien beams from the skies. Once word has been received at the UN that Van Ponder has been killed, he miraculously appears, and funding moves forward.

Assurances are given to Hotchkiss he is fine, and we, the viewers have revealed to us that Van Ponder is an alien who can duplicate himself through astral means and convert his duplicate into matter. He briefly communicates with his alien superiors, advising stronger action, as the warning from alien beings have been ignored. Suddenly, global disasters are triggered around the world--floods, earthquakes, fires, and nuclear incidents--which cause the press to speculate the alien warning is connected to the episodes.

Dr. Van Ponder, under a ruse, has an unexpected change of heart, and plans to cancel the program, going so far as to write up a statement to issue to the UN, but Dave ignores his wishes, and while speaking at the UN, states they will continue, and he argues that it is precisely because the Gamma aliens do not wish humans to travel into space that the project must go forward, much to Dr. Van Ponder’s displeasure. Another scientist named Johnny swears he had seen Van Ponder in two places.

After a mishap with a blow torch to Van Ponder’s hand triggers Johnny’s suspicions that the doctor isn’t human (a sequence that one might see from The Outer Limits, or Twilight Zone), Dave grows suspicious. But Dr. Von Ponder convinces the project medical doctor, Lasar, that Johnny has been under too much pressure, and he is ordered to be grounded from the flight. Dave finds the actual remains at a junkyard of the car that crashed, but can’t warn Sybil, or the others that Dr. Van Ponder might be an imposter, before the launch countdown begins. Johnny has a change of heart, and due to a lack of astronomical engineers, is back on the flight. Dr. Van Ponder duplicates himself again, which Dave witnesses. Three ships are launched, each ship being part of the final space vehicle.

After the launch, separation, and assembly, Dr. Van Ponder confronts Johnny with an ultimatum, explaining his races’ intention, tells him that humans are mere children in the cosmos, and not ready for space travel, and that his race is acting on behalf of the best intentions for the human race. The impostor Van Ponder offers to give Johnny the same powers--beings that can convert energy into matter--but Johnny refuses, and is killed with a single touch (another sequence that one might expect to see on The Outer Limits or Twilight Zone). Sylvia walks in to find him dead, and the doctor explains that Johnny could not survive the stress of the launch.

The doctor, as captain, announces to the crew his intention to build up enough solar energy to trigger the Photon drive and break through the barrier. If they were to reach the barrier before the build up, they wouldn’t be able to break through until they can reach such a velocity. Dave informs Sylvia that the doctor isn’t human, just as Dr. Van Ponder appears and warns him not to get out of line. After the space burial of Johnny, Dave speaks to Dr. Lasar in private and demonstrates evidence that Van Ponder is a carbon copy of the real man. Sylvia walks in and Dave persuades her. The doctor notes that Dr. Van Ponder hasn’t permitted a physical. Dave points out the doctor might not have a heartbeat. Dr. Lasar confronts Dr. Van Ponder about a physical, which he conveniently manages to avoid when the barrier appears. After speaking with the pilots, Van Ponder manages to change his physiology and create a heartbeat, but there’s a trade-off: He loses a number of his powers and becomes more human. After passing the exam, Van Ponder strangles Dr. Lazar, and it becomes a race against time for Dave and Sylvia to stop Van Ponder from destroying the ship, and allowing the Sigma crew to achieve deep space travel. 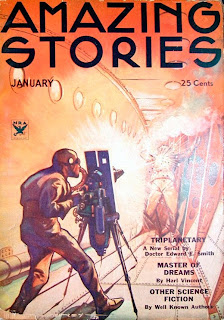 Edward E. Smith, Ph.D or “Doc” Smith, as he is affectionately known, the father of the sweeping space opera, in his 1936 tale "Triplanetary," the first of his Lensmen series, deals with two alien races: The Arisians, human-like beings, and the Eddorians, transformative beings that are hard to describe. Both Arisians and Eddorians manipulate the development of the human race in a long-term breeding program with the intention that the human race create Lensmen and Boskone, men with higher powers who would play out an ancient struggle without their awareness of themselves as pawns. The long term struggle is focused on four solar systems: Sol III, Rigel IV, Velantia III, and Palain VII. Regarding Earth, both alien forces manipulate matters and play out the fall of Atlantis, the Fall of Rome, and the trigger of three major wars, 1918, 1941 (Smith’s prescient prediction about WWII), and a war sometime in the late 90s. Before these tales unfold in the far future. One interesting example could be cited here, from the end of chapter three:

Gharlane of Eddore looked upon ruined Earth, his handiwork, and found it good. Knowing that it would be many hundreds of Tellurian years before that planet would again require his personal attention, he went elsewhere; to Rigel Four, to Palain Seven, and to the solar system of Valantia, where he found that his creatures the Overlords were not progressing according to schedule. He spent quite a little time there, then searched minutely and fruitlessly for evidence of inimical activity within the Innermost Circle.

Of course The X-Files touched on the meme of rival alien factions within their own mythology. For example, the alien rebels who appeared, starting in season five, that were immune to the effects of black oil - and resisted the symbiotic / parasitical entity within.

Watching the film recently, and pondering the recent wave of current events, without the following point trivializing the tragedies in Japan, but considering the wave of earthquakes, tsunami’s, volcanic eruptions, tornados, and other global events, and while they might be the by-product of climate change, it would make sense for a powerful alien race to trigger such disasters to slow down our evolution as a species.

Bear in mind, that there have been claims by countless NASA astronauts, of information that has never been released for the sake of national security, by Neil Armstrong, Edwin “Buzz” Aldrin, former NASA chief Maurice Chatelain, Gordon Cooper, Edgar Mitchell (founder of Institute of Noetic Sciences), of UFO activity in space and an extra-terrestrial base on the Moon, (as argued by people like Richard C Hogland) with aliens that have made it very clear to NASA not to establish a lunar base or revisit the Moon. Certainly shades of the same themes / memes expressed in War of the Satellites.

UFO/AAT skeptics have pointed out that the above-listed themes have been so long running with Science Fiction literature and filmmaking, that these memes can give ammunition to such skeptics that genre pop culture influences shape belief systems of things that might not have a paranormal or unexplained basis.

What is interesting about these connections from a cultural standpoint and this ‘chicken or egg’ argument, is are these interests just random or part of a greater collective unconsciousness?

Indeed, what if truth is stranger than fiction.

*Susan Cabot died in 1986. Her son, who suffered from dwarfism and was on medication, bludgeoned her to death with a weight-lifting bar in her Encino home after years of psychological abuse, verbal abuse from the mother, coupled with an unhealthy relationship between them. He was arrested, charged with involuntary manslaughter and received a three-year suspended sentence.
Posted by The X-Files Lexicon Blog at 9:58 PM No comments: