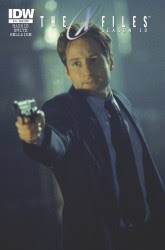 The fourth part of the “Pilgrims” story begins with Scully on top of Mulder in bed aiming a gun at his head. She asks to see Mulder’s eyes, but he knocks the gun out of her hand, throws her to the ground and tells her to surrender – his voice changes and his eyes are clouded by the familiar Black Oil.

The comic flashes way back, to 72 million years ago. Dinosaurs are wandering the land as something flies across the sky and impacts in the distance. We see the familiar shape of the gray extraterrestrials in the dust approaching a dinosaur, before the comic shifts to two years before the present at an Arabian Desert excavation, presumably in the same spot. That scene ends and we return to Scully and Mulder, who has been narrating the whole section. He is still possessed by the Black Oil and is trying to explain it to Scully as she’s driving. Mulder explains that he needs her help and tells her that she’ll be able to help if she values the oil’s chosen host.

We cut to see the Cigarette Smoking Man enter an apartment in New York, where a shadowy figure wearing glasses is playing chess. The figure goes on about a specific chess game as CSM stands listening and says “it’s in the country now”. The figure calls the entity possessing Mulder by name and asks CSM if he’s trying to follow it or just the host it’s chosen to take. CSM angers the shadowy man, who uses telekinetic power to lift CSM Darth Vader-style as he assigns him a new mission.

We go back to Deputy Director Skinner, who has Alex Krycek bound in his apartment still. Krycek is nervous about what Skinner is planning to do with him as he stands above him, messing with a length of rope. Skinner explains what a pain Krycek has been throughout the years and how he shot him in the head (in the episode ‘Existence’, S8E21). Krycek seems surprised by this information, as Skinner hoists him up with the rope attached to his hands. Just as Skinner does this Krycek warns him that something is after him and the door rings.

We return to Scully and possessed Mulder riding in a car to an unknown destination. Mulder assures her that he will reveal truths to her as long as they keep going. Scully gets pulled over by a police officer and Mulder warns her that assassins could be sent after them. She asks if he knows anything about their son, William. We bounce back to D.D. Skinner, who answers the door with his handgun ready. No one is in the hallway, but before Skinner can return a bright light envelops him. Back with Scully, she is speaking with the officer who pulled her over, who insists that she get out of the car but won’t tell her why. She turns to Mulder but realizes that he has left. Flashing back to Skinner’s apartment, we see Scully enter the apartment armed with a handgun. Skinner calls out to her to find him since he’s been blinded, but we don’t see Krycek hanging from Skinner’s rope anymore.

We return to Krycek, who has inexplicably been snatched by two helicopter crews (black helicopters, no doubt). He is strapped to a chair and is wearing an orange prisoner-type outfit. He recognizes the situation he is in and begs to be released, and as we see the helicopter land, the Cigarette Smoking Man is on the spot waiting for him. We end this issue with Scully and Skinner deciding that they have to go out and find Mulder then figure out how to save him. Scully says she knows where the Black Oil is taking him and we see Mulder sneaking through the woods. He looks up and sees a big sign for “Skyland Mountain National Park”. 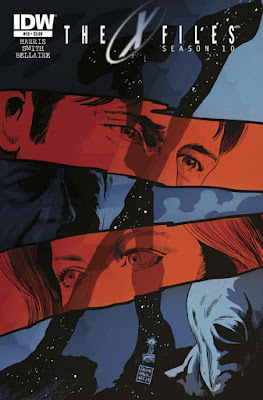 This issue starts off with a memory of Alex Krycek’s where he’s emitting Black Oil into an alien object in a missile silo (from the episode “Apocrypha”, S3E16). Krycek is recounting what he can remember since mysteriously re-emerging into the X-Files. He recollects a group of grey aliens approaching him and he tells his captors that he is their prisoner. We see that he is being questioned by the Cigarette Smoking Man. CSM tells him that his very existence is troubling since D.D. Skinner shot him in the head and Krycek has no memory of that event (in the episode ‘Existence’, S8E21). CSM expresses that his memories aren’t fully complete either and Krycek states that they should be working together since they’re both after the same thing.

We skip to Skyland Mountain in Virginia at 10:13PM. A group of sheriffs are standing near their cars drinking coffee. They stop what they’re doing when Mulder emerges from the woods and one sheriff reaches for his gun. He tells Mulder his orders are to detain him until the F.B.I. can retrieve him. As Mulder turns his back on the sheriff, his eyes blacken and we reach the title panel. We return with Scully and Skinner reaching the mountain at 11:21 PM. They find the group of sheriffs dead on the ground. They enter the station where the sheriffs were parked and find a security system. From there they see that, when the sheriff touched Mulder’s arm, he became possessed by the Black Oil, turned and shot his fellow officers. The officer then approaches the camera and then the feed dies. Scully and Skinner look around the area and find Mulder sitting on the edge of the ramp for the mountain lift looking at the woods somberly. He tells Scully that they’re too late and he’salready gone.

Back to CSM and Krycek, CSM is not satisfied with the answers he has been given and Krycek frantically tries to explain that he knows what he is and because he’s been bonded with the oil he can tell. It does him no good as CSM puts out one of his infamous cigarettes in Krycek’s eye, thus continuing the X-Files tradition of Krycek’s abuse. CSM asks more forcibly where Mulder is and where the Black Oil is taking him. Before he can answer, the mysterious man in glasses shows up and telekinetically throws CSM across the room, then frees Krycek. Krycek talks to the man, who communicates telekinetically as well. He mentions to Krycek something about “The Forsaken Ones” and Krycek says he eliminated them, but he is told that he is wrong. Krycek explains that he is their exterminator and every time he is killed in the future they can “grab him out of the past”. The man says to Krycek that he doesn’t understand one thing: what the entity he is hunting, which is called “Sheltem”, wants and what he is here to prevent. Krycek picks up a gun from the floor that the man left in front of him, points it at him and CSM, and says that he wants to go home. The man tells him he had better stop, but instead Krycek holds the gun to his head and fires.

Back at Skyland Mountain, Skinner is talking to Mulder and tells him that they will comb the woods to make sure they can’t find the now-possessed sheriff. Mulder leaves Skinner to it and goes to talk to Scully. He tells Scully about his time being possessed by the alien oil and that it wouldn’t give up any information other than “he’s ok”. They infer that it was talking about William. Mulder says he thinks that no one knows where he is so he is safe and Scully agrees with him. As they talk, a thunderstorm rolls in. Scully senses something is wrong with the weather and calls back all the search teams looking for the sheriff.

We see the possessed sheriff wander into a clearing and say “the cradle is full”, as a large crowd of other possessed individuals emerges. Suddenly, a man outside of the group starts screaming and we see that he is on fire. The possessed sheriff turns and sees the familiar and terrifying faces of a group of people with their eyes and mouths sewn shut that we’ve seen on and off throughout The X-Files. They burn this group of people and the oil seeps out and bubbles. All that is left are the charred remains of the people the oil possessed. As the smoke clears, we see Krycek emerge from the woods. He looks at the remains of the burned people and says “I’m free, aren’t I?” and is answered by thunder. He walks back to the woods.

We then get back to Cigarette Smoking Man in New York in the Mysterious Man’s apartment. He tells the man that he’s heard some interesting information from his sources in the F.B.I. The MM doesn’t seem impressed and CSM notices that the room is full of people sitting in the dark. We see Mulder’s old informant X and the Well-Manicured Man sitting amongst them and the MM says they all owe him a lot for their “second chances”. CSM says that they all have the same concerns and that they know him to be goal-oriented. He reaches for his cigarettes, which he finds are empty, then a familiar “ssst” sound emanates and he falls face first to the ground. The Mysterious Man tells someone that was behind CSM to clean up the mess, as we see CSM degrading to the green goo. We see that the person behind CSM was actually a new CSM. The plot thickens.

Now we have seen that the Black Oil can possess individuals, and that characters from the past have been returning, dying, and returning again. Could this Mysterious Man be the origin of their resurrections, or are there outside forces that Mulder and Scully haven’t encountered before? Multiple past story elements have intersected in this storyline and it’s been very interesting from a mytharc perspective. I commend Joe Harris’s ability to take past characters and twist them into a new plot that any X-Files fan could appreciate. We’ll see where this goes in future installments!

Special Thanks to Liz Tray for editorial assistance.
Posted by The X-Files Lexicon Blog at 7:44 AM No comments: