Technically, this ties in with my previous blog about remembering past genres, while this isn’t relevant to The X-Files, I have little doubt the host(s) of the following local television show would have interviewed people connected to The X-Files or Millennium, back in the 90s, had this show still existed.

Recently there was an event at a local theatre that was special. A evening and a special projected broadcast re-run of a 1973 episode of a local horror TV show that aired double features of old horror and science fiction movies, and was hosted by an unassuming, and unlikely chap named Bob Wilkins. "Creature Feature's" was locally produced at Oakland, CA TV station KTVU channel 2 from 1971 until 1984. The following Trailer should give you an idea:

Back in the 1970s, as a child, I distinctly remember staying up late to watch this show from 11 to 1, on Fridays or Saturday nights, as I was permitted to (encouraged by my Dad, another lover of these genres), and usually fell asleep before the movies ended. But Bob Wilkins and his eventual replacement John Stanley, were the personalities who exposed me to a great many horror and science fiction genre shows, before the advent of the VCR, DVD, Digital Cable, Tivo, Blu Ray, or iMovie. 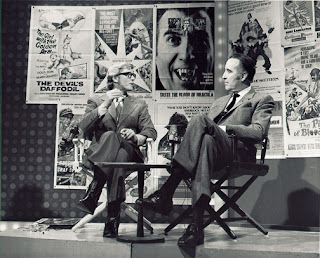 While this show might not have been nationally syndicated, for residents of the greater bay area, Northern California, and who came of age in the 70’s and early 80’s, Bob Wilkin’s was truly beloved. As well as his benefactor, John Stanley, who continued the show from 1979 to 1984. Stanley went on to write a great collection of genre movie guides titled "Creature Features: The Science Fiction, Fantasy, and Horror Movie Guide”, published by Boulevard Books, and highly recommended if you can find it. This show became so popular locally that it was beating the ratings of network shows like Saturday Night Live, much to the incredulous feelings of network executives.

Wilkin’s in the seventies interviewed an amazing pool of talent that was connected to these genres. Christopher Lee, Leonard Nimoy, William Shatner, Forest J. Ackerman, William Marshall, Larry "Buster" Crabbe of Universal serials, "Flash Gordon, Buck Rogers" fame, John Landis, Ray Harryhausen, and countless others. George Lucas was a fan of the show and has acknowledged watching Wilkins when he had a show in Sacramento in the 1960s. The Creature Features set was cheep and cheesy, but that never mattered.

You can get a further taste of Wilkin’s here:

Bob Wilkins had a certain dry humor in the way he hosted, he didn’t take himself too seriously, nor the film's he showed too seriously, he wasn’t a fan of horror or science fiction, but most importantly he respected the fans that enjoyed these genres. He had an unassuming quality that made him a very unlikely person to host such a show, and he never depended on gimmicks, he never talked down to his audience, either adults or children. He didn’t need to. While he featured many truly awful B genre movies, he once commented: "I knew that if I told people to watch this film, they wouldn’t. I told them to not watch it. I had a TV guide and told them what was on the other stations at the time." Of course, it worked like a charm, people would stay and watch the movie. Bob was smart enough to surround himself with people who understood these genres, and he respected the fans when they would write back and correct him when his information was incorrect.

Even the cheesy 70s funk theme that opened the show’s credits, had a certain charm to it, and still can make me smile:

Once Star Wars broke in 1977, Bob Wilkins created an afternoon program for kids titled Captain Cosmic, while he was hidden in a superhero costume with a helmet, everyone knew it was Bob. The show ran Japanese kids shows, like Ultraman, Spectraman, Star Blazers, and Johnny Sokko and his Flying Robot. Thus, predating the rise of Japanese Anima that is common today. Again, the sets were cheesy, as well as the prop boxed robot, 2T2. But it was popular and remembered to a certain generation. 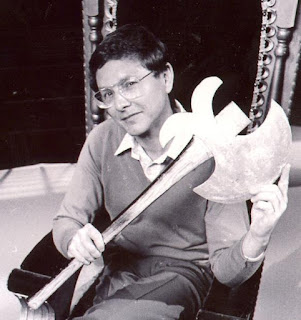 Back in the 70’s, there was a latitude with local programming to allow production of such quirky shows. Before the advent of media consolidation, or specialized network programming like CNN or HBO, or a sophisticated audience that has become somewhat jaded to such niche programming. This kind of a show wasn’t uncommon; there were other similar programs throughout the United States in the 1960s and 1970s at local stations. Of course some of the profile names that come to mind, as far as nationally syndicated programs are concerned, would be Elvira and Joe Bob Briggs, as well as Mystery Science Theatre 3000. But I do tend to feel with everything that has changed, something has been lost. In this day and age, on-line sites, and genre bloggers are the people who are substituting for this gap, but it hasn’t compared really.

You can find out more about Bob Wilkin’s at the following site:

Bob Died in January 2009 after a long struggle with Alzheimer’s.

Most important, John Stanley’s site covers a lot of current information, as well as some fairly significant news.

A 75 minute documentary about the history of Wilkins and Stanley’s "Creature Features" is available on DVD to purchase, and that can be found of Stanley’s site.

I am certain there might be others who visit this Blog who had similar experiences as children, either in the States, UK or Europe with similar shows, and I’d like to hear about them. Everyone is welcome to comment about their own shared experience.

I’d like to close with a favorite, humorous, Americana Slogan of Bob’s: